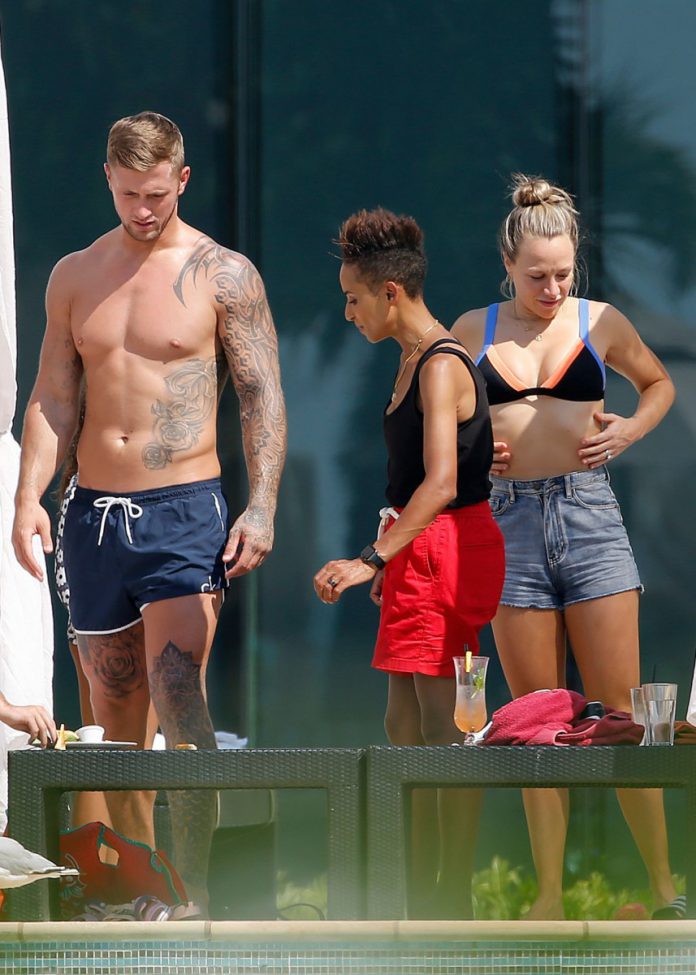 Jacqueline, 27, is finishing her stint in the I’m A Celeb jungle and is unaware that guilt-ridden Chloe Ayling has come forward with fresh claims he cheated on his wife after appearing in Celebrity Big Brother last year.

Dan Osborne, Adele Roberts and Chloe Madeley relax by the pool as they wait for Jacqueline Jossa to leave I’m A Celeb

Dan, 28, was spotted pacing up and down at the hotel where the celebrities’ families are staying ahead of the I’m A Celeb final on Sunday.

The tattooed hunk, who has also been accused of sleeping with Gabby Allen, looked deep in thought and Jacqueline’s parents and their kids, who accompanied him to Australia, were elsewhere.

James Haskell’s wife Chloe and I’m A Celeb contestant Adele chatted to the brooding star and kept him company.

It comes after Chloe revealed to HOAR that she romped with him and US reality TV star Natalie Nunnin a hotel room after a boozy night out.

The tattooed hunk fails to raise a smile

Their steamy session took place on the same day Jacqueline, 27, posted a picture of her husband on her Instagram account with the caption: Its so good to have this man back, I love you always.

Last night Chloe said: I feel so sorry for Jacqueline. She deserves to know what Dan is. Hes making a fool of her.

Chloe, 22, met Dan onCelebrity Big Brotherlast year. And she told how she hooked up withformer Towie star Danand Natalie after the trio partied in central London and the two girls werepictured kissing in the street.

It was a debauched night we were drunk and we let loose. After it happened Dan was full of himself. He didnt seem to care what had just happened in front of everyone.

I distinctly remember Dan saying he needed to go because he was spending the day with Jacqueline and the kids because it felt so jarring with what had just happened. I have regretted it ever since.

Chloe was single at the time whileNatalie, 34, is married to American footballer Jacob Payne.

The group enjoyed a night out in London before returning to Natalies room at the St Martins Lane hotel at around 3am.

Chloe added: Dan joined us after the dinner and we went to two nightclubs before going back to the hotel in the early hours of the morning. There are pictures of us out and me and Natalie kissing. We drank more in the lobby and took more booze upstairs. It was very drunken.

During the night Natalie had said she wanted to have sex with Dan and once we got upstairs she tried it on with him. He was calling out my name when he was having sex with Natalie.”

Easy TV trick that will make you BETTER at Call of Duty and other...