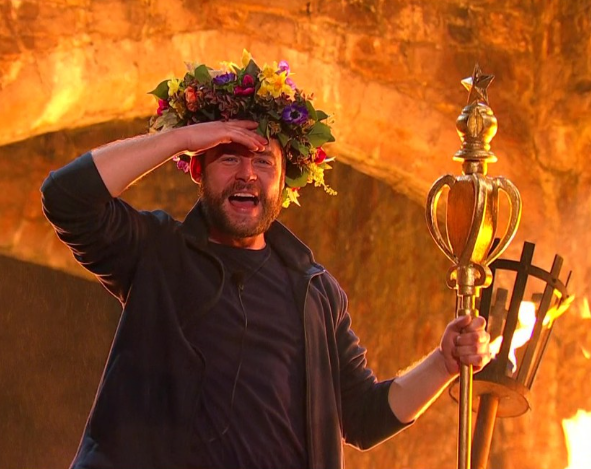 DANNY Miller has been crowned the winner of I’m A Celebrity Get Me Out of Here!

The soap stars went head to head in tonight’s final, after Frankie Bridge finished in third place earlier in the evening.

Presenters Ant and Dec kept the pair hanging before Danny’s name was called out, leaving them gobsmacked.

After being crowned, the hosts asked if he had any words for voters and Danny said: “I’m speechless for once. Honestly from the bottom of me heart and me family’s heart thank you so much.

“This is the best thing that’s happened to me aside from having my son.”

Speaking before he was announced as the winner, the former Emmerdale actor said of taking part in the show: “The original idea was to show them that I don’t just cry on television.

“Everyone knows me as that character [Aaron Dingle] so it was my chance to have a laugh and show another side of me.”

Meanwhile Simon said of his experience: “It wasn’t as bad as I thought it would be.

“I really don’t like spiders, they [producers] kept saying ‘what would be your worst thing?, and I thought ‘I’m not telling you.’”

When Ant and Dec complimented him on his positivity in the castle, he said: “You just have to get in that zone and try and stay there.”

Earlier in the show, the final three were seen taking part in their last trials.

Danny’s was called Fill Your Face and it involved sitting on a Castle chair with a large see-through helmet placed on top of his head.

Meanwhile Simon faced Frightening Feast, which saw him having to eat items including pig’s eye, goat tongue – a first for the show – and Fermented Castle Gruel, which was made up of fermented egg, tofu, plums and more.

The Corrie star also tackled sheep’s penis and in another I’m A Celebrity first Simon was then served cow’s vagina.

Elsewhere, Frankie faced Tomb of Doom as her final trial, which involved being locked inside a tomb, which would be slid inside a chamber in the Castle wall.

She would be joined by snakes and would need to stay inside for 10 minutes; every two minutes earned a star.

Having successfully won all of their meals, drinks and treats, the three finalists sat down for their food.

On the menu for each was halloumi fries, full English breakfast, cheeseboard and chocolate for Danny, while Frankie had baked camembert, roast beef dinner, apple crumble and custard and white chocolate fingers.

Simon opted for prawn cocktail, lamb chops, mash and peppercorn sauce on the side, Eton Mess and chocolate. Boris Johnson admits he’s ‘very worried it all might go wrong’ & leaders may...

Ant McPartlin leaves Im A Celeb fans in stitches as he jokes about year...