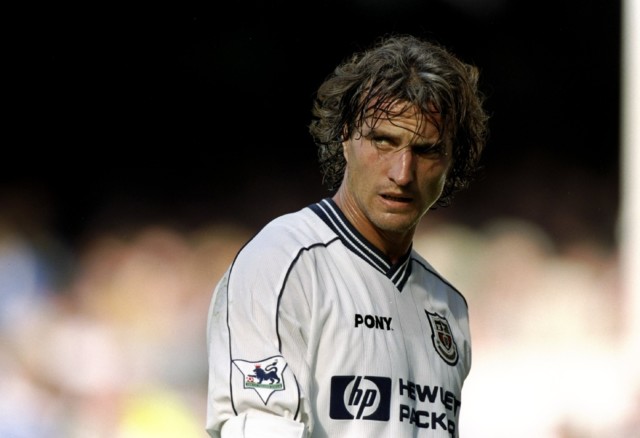 FOOTY pin up David Ginola has told how he once wanted to have a David Beckham style skinhead – but was banned by lawyers.

The I’m A Celeb star was blocked from chopping off his locks because he had an advertising contract with L’Oreal – in which he had to infamously say ‘Because I’m Worth It”. The deal BANNED him from getting his locks cut too short.

“My first thought when he got a Brylcreem deal was that he must have swapped his contract for Brylcreem with Gillette.”

Ginola said his time as a model has led to him receiving no shortage of stick from fans.

“Sometimes I will be at an airport and a member of the public will come up to me and say: ‘Look, it’s the guy from the shampoo advert’ rather than: ‘Look, it’s that footballer.’”

The 54-year-old has also revealed that he one day fancies a stint as a football manager – and already has a haircut in mind should he land a job.

“I would be tough as a manager,” he said in memoir La Magnifique.

“The first thing I would do is shave my head to make me look meaner and make people accept me.

Today, we told how David could remain on our screens long after the ITV show ends – he wants to star in movies.

He said: “I think I could make it as an actor because I always put myself in the position of someone else and that is what acting is all about, seeing a role through different eyes.

“As it happens, I have already been approached to act in films.”

Explaining the kind of role he’d want Ginola added: “I would never play the role of someone whose character is the opposite of mine.

“I would have to be close to the role to get into it. I quite fancy myself in films like Dances With Wolves with Kevin Cosnter, or Legends of the Fall with Brad Pitt.

“If I wanted to be an actor it would be possible for me to have a go.”

David set out his ambition in his memoir La Magnifique. The good looking ex footballer wants to star in movies Latest General Election polls and odds who will win in 2019?

Love Islands Paige Turley says ex Lewis Capaldi will mock her for being on...