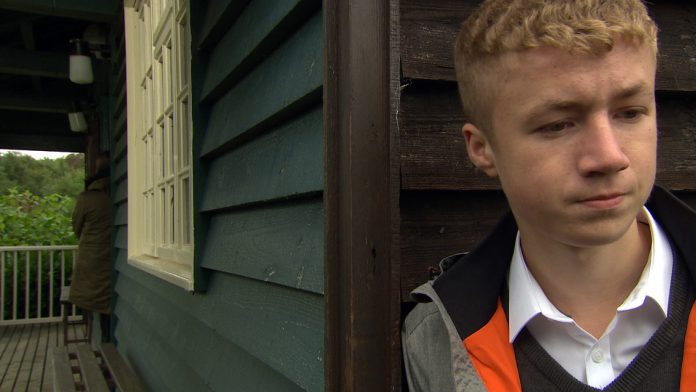 EMMERDALE’S Noah Dingle is left fighting for his life after taking drugs he confiscated from niece Sarah Sugden.

Charity Dingle’s son finds himself in danger while protecting Sarah during tonight’s episode.

Viewers of the ITV soap already know Sarah is being encouraged to take drugs by love interest Danny.

However, things take a turn for the worse for Noah after he tries to protect her and swallows a pill himself.

The teen collapses in the woods after suffering a bad reaction to the drug.

And while Sarah may be concerned about Noah, she does her best to avoid suspicion by telling Charity (Emma Atkins) and Vanessa Woodfield (Michelle Hardwick) that he slept at Samson’s house.

Although it’s not long before Sarah is caught out as Belle (Eden Taylor-Draper) tells Charity and Vanessa that Samson hasn’t seen Noah since the day before.

Will Sarah tell the truth before it’s too late?

She said: “Hes trying to look after Sarah and it all goes wrong.”

The television producer also revealed Charity points the finger at Graham Foster for the incident, saying: “Charity blames Graham for what has happened to Noah.”

Love Island’s Callum and Molly on the rocks after blazing row on night out...

‘Less than 20% chance’ Boris Johnson will have to trigger Plan B Covid restrictions...