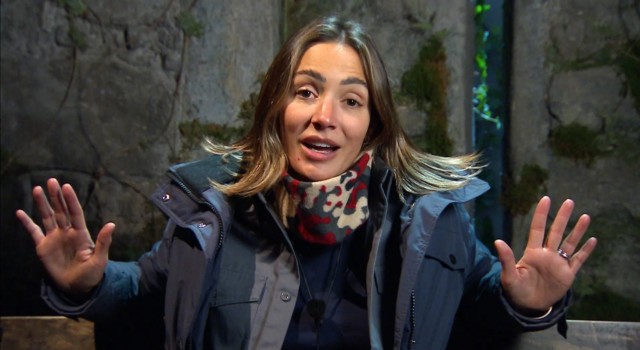 FRANKIE Bridge has revealed what happened off camera when I’m A Celebrity… Get Me Out of Here! was taken off air.

The 2021 series was filmed at Gwrych Castle near Abergele in North Wales for the second year running and it was eventful – with intruders removed on two separate occasions and the contestants evacuated when production was interrupted by Storm Arwen.

Frankie Bridge has revealed what went on off-camera when the I’m A Celeb cast were evacuated from Gwrych CastleFrankie, 32, spoke of her time in the castle on Heart Radio today

The Saturdays singer, 32, came third after spending 20 days on the series, which ended on Sunday with Emmerdale star Danny Miller being crowned the winner, and Coronation Street’s Simon Gregson taking second place.

She said: “No we didn’t, so we kind of got held in a room in the castle for ages, we had no idea what was going on.

“I only knew something was a bit off when everything was covered in leaves, even my hammock, I couldn’t see it anymore, so I was like, ‘that’s going to be interesting’.”

And she said of them having to leave the castle: “Eventually in the evening they came in and said ‘we’re going to have to evacuate you’ so we all went to individual houses again like we did when we were in isolation.

“But we were allowed to eat and be warm and wash.

“I took all of my camp gear and put it all into the washing machine, even my coat. And even my toiletry little bag thing that they gave us and I ironed it all, and I haven’t done that in 20 odd years!”

Tensions reached breaking point in the freezing castle, especially when it came to cooking dinners, with Naughty Boy clashing with Kadeena Cox and even Frankie.

But the mum-of-two said it is now wall water under the bridge and Richard Madeley – who was forced to leave the show following an illness on day three – has ensured they stay in touch.

She said: “Richard actually, set up a WhatsApp group, it’s called ‘The Sexy Badgers’, obviously, and everyone’s on there which is so nice!”

Tune in to Heart Breakfast with Jamie Theakston and Amanda Holden weekdays from 06:30 – 10:00 Emmerdale will reduce to two episodes a week but remain on air after becoming...