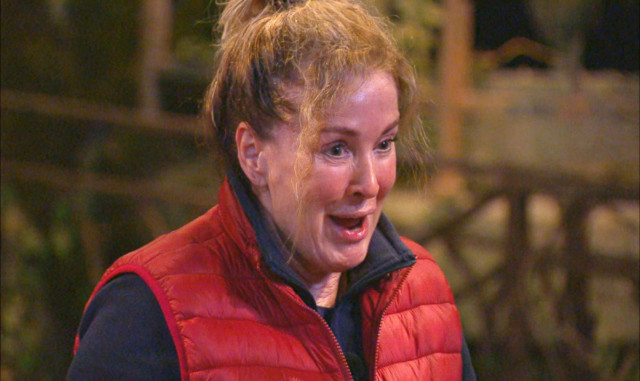 The 63-year-old soap star made the shocking revelation when talking about how much she snores in camp.

Beverley Callard said her husband Jon is a “mega shag”

“He is a mega shag and he dances for me in the kitchen every morning and makes me laugh my socks off.”

Later in the Telegraph, Vernon Kay said: “She let it be known that Jon was very good at… how do we put it?

“Shall we say, bedroom activities.”

Beverley continued: “I do actually call him that though Vernon, I go, ‘Jon! You are my mega shaaaag!’”

But the actress previously revealed that she wanted to “stay single forever” before meeting Jon, and that she was initially reluctant to go on a blind date with him.

She told OK! magazine: “We were set up on a blind date by some mutual friends.” The Corrie actress has had a tough year following a botched hip operation.

But luckily Bev has had a caring husband by her side through it all.

“I really didn’t want to go because at the time I thought all men were [bleeps] and I wanted to stay single forever.

“We organised one date and I chickened out and stood him up. Beverley has been missing her husband in camp

“Then, on the second attempt, I turned up and saw he had a shaved head, a gold tooth and was covered in tattoos and I thought, what am I doing?!”

Beverley revealed she thought she’d lost her husband in 2016 after he collapsed at the supermarket.

She said of the incident: “Jon’s my rock. I see him as indestructible so when I was told he had collapsed, I just went numb.

“He is never ill. What happened came completely out of the blue.

“I was on my way to A&E with my stepson Jonathan and I was begging, please God no, this cannot be.

“I was incredibly frightened because I didn’t know what I’d do if something happened to him.

“He’s my soulmate and my best friend. He’s completely and utterly the love of my life.”

I’m a Celebrity is a fix and ‘ITV have already planned’ the winner says...

Brits could be hugging friends and family by June, gov scientific adviser hopes