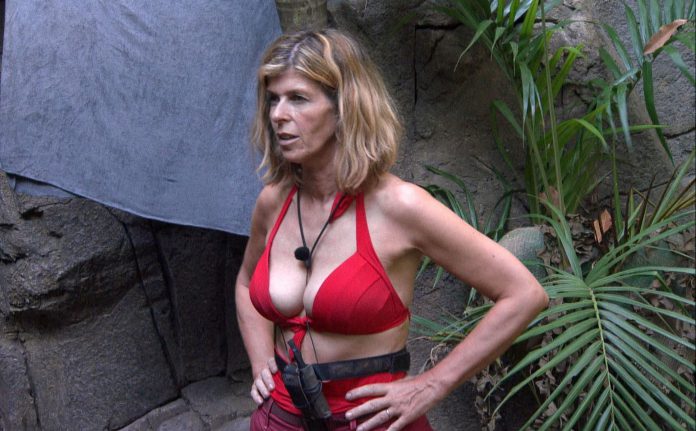 HER gorgeous appearances in a plunging red bikini have won her a new army of I’m a Celeb fans – and even a shower of flirty comments from campmate Myles Stephenson.

However, there’s no doubting that Kate Garraways biggest cheerleader is Derek Draper, her adoring husband who has been by her side for fourteen years.

After flying to Australia with the couples children to show his support for his wife, Derek has showcased his devotion in a series of heartwarming interviews in which he has praised both his wifes amazing figure the product of an impressive two stone weight loss in the last year – and natural beauty.

In fact, woe betide anyone who dares to question her: when fans wondered if 52-year-old Kate was sporting a full face of make up when she first entered the jungle last month Derek was quick to respond: “Take it from someone who knows – she never looks better than first thing in the morning.”

Its just one of a plethora of compliments hes lavished on his wife, commenting on her knockout appearance and enthusing that hes fallen in love with her all over again since shes appeared on the show.

His touching comments have highlighted a fifteen-year romance that, to date, has remained largely out of the public eye.

But their marriage is widely seen as one of the happiest and most stable in showbusiness despite the fact he initially labelled her as a ‘bimbo’ and stood her up.

Roll back the clock to autumn 2004 and Derek was best known as a former Labour aide who had left politics in disgrace, in 1998, after being taped by an undercover reporter from The Observer offering to sell access to government ministers.

After the scandal – dubbed Lobbygate – he retreated to America for three years and retrained as a psychotherapist before coming back to the UK in early 2004.

Meanwhile his future wife was already blazing a trial on ITVs morning show GMTV, working alongside Gloria De Piero, now a Labour politician, but back then the shows political editor.

A divorcee, Kate had been married for four years to Ian Rumsey, her former boss at ITV Meridian.

It was De Piero who decided to play matchmaker although Derek needed some convincing.

“I said I didnt want to go out with a high-maintenance TV bimbo, but she said Kate was not like that,” he recalled in a recent interview, adding that he soon realised she was “fiercely intelligent.”

The couple were introduced over drinks at the London hotel Claridges, although the early signs were not auspicious: Kate initially ignored Derek and, although he asked her out on a date, he then cancelled it to serve wine at an amateur watercolour painting exhibition at his church.

“I really thought it was a wind-up. But I turned up and he was indeed serving wine to the congregation in a salmon-pink jumper,” Kate later recalled.

How gorgeously ridiculous is she? https://t.co/3Bluu5OxL8

Dates in a hospital bed

Love blossomed nonetheless, although just weeks later their fledgling relationship was put to the test when Kate developed a benign cyst in her kidney which doctors initially thought was cancer.

“When youre a woman in that early dating phase youre blow-dried, fake-tanned, silky-soft-skinned, but I was in a gown in a hospital bed with unshaven legs,” she recalled.

Both later said that the illness made them determined to cement what they had and thecouple tied the knot in north London in September 2005.

Among the guests were a number of Strictly stars, including Anton du Beke – who went on to become Kates professional partner in the fifth series of the show two years later – and Brendan Cole, from whom Derek was secretly having dance lessons for the wedding.

Hottest sex in their 50s

And while Kate has been open about how much she loves being a mother she admits her one regret is that her age she was 38 when she had Darcey meant she couldnt have as many children as she would have liked.

“I wish Id had children younger in some ways I would definitely have had loads more,”she once said.

As well as family time the couple make a point of getting away on their own at least twice a year to spend some quality time together, while Kate has been open about the fact that she finds sex in her fifties far more enjoyable as shes less self-conscious about ‘putting on a show’.

Her down to earth approach – together with that red bikini is no doubt one reason shes won so many new admirers – among them her fellow camp dweller Myles Stephenson.

The Rak-su star, 28, has flirted outrageously with her in recent days and earlier this week announced that Kate was his telly crush.

His admission led to Derek confessing that he had been left a bit “jealous and paranoid” although he neednt worry too much: as he told Lorraine Kelly, “shes coming home to me”.

As her stint in the jungle cements her place as one of nation’s most fancied presenters, Derek knows he’s a lucky man.

Emmerdale’s Olivia Bromley has secret talent off-screen – and it’s worlds away from playing...

Love Island host Laura Whitmore defends flying back and forth to South Africa for...