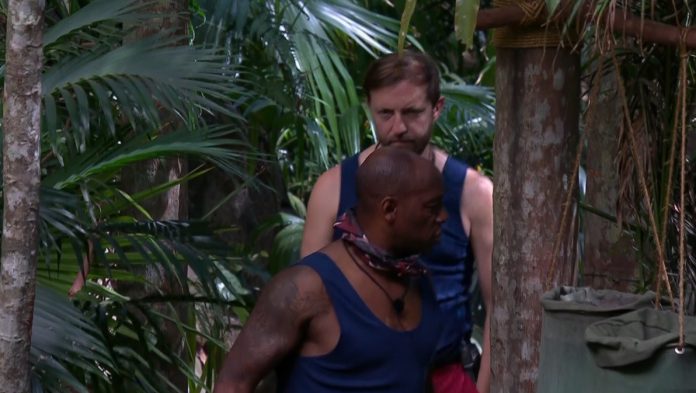 IAN Wright is facing an Ofcom complaint over accusations that he has been bullying Andrew Maxtell on I’m A Celebrity.
Viewers have taken to social media and complained to the broadcasting regulator to claim that Ian has been purposely targeting Andrew in particular, and it all kicked off again when Ian lost his cool on Tuesday’s episode.

Andrew had returned from completing a bushtucker trial and insisted on leaving the washing up until later in the evening; he was on washing duty with Caitlyn Jenner but told her that he was “going for a nap”.

“We just don’t need to do it yet,” he insisted after Caitlyn told him it was no problem and she would take James Haskell.

However James proceeded to burn his foot when the hot water splashed, and it left Ian very unimpressed: “He’s not meant to be doing that.”

“It’s a good job I am not the leader,” muttered Ian, “this won’t be happening, he would be down here doing this.”

He added: “We’re grateful for the ten stars but at the same time you can’t get ten stars then clock off, it it worked like that it would be anarchy.”

Ian then approached Andrew to talk it out: “The thing is, James had to go and help with the dishes and so what I am saying is that because you know you got the stars, and then you came back, but because Caitlyn wanted to do it you went to sleep.

Andrew apologised and said he would “do it in the future” but Ian was still not happy: “Do you understand what I am saying? I don’t want us in a situation where I am festering.”

Ian and Andrew have clashed in recent days

Ian’s words however left a sour taste for some fans, with many taking to Twitter to suggest it was now “borderline bullying”.

“Haskel actually thinks he is the boss. The way he talks to the women is medieval. And the way they both treat Andrew is real school yard bullying (sic).”

Am I the only one that thinks Ian is bullying Andrew? #ImACeleb

James Haskel and Ian Wright are both prize twats disguised as gentlemen. Haskel actually thinks he is the boss. The way he talks to the women is medieval. And the way they both treat Andrew is real school yard bullying #ImACeleb

i think its borderline bullying now against andrew from ian and james. theyre always at him for no reason. #imaceleb

Andrew is not being bullied. People are allowed to dislike other people. Not everyone is going to get along in life. No one accused Andrew of bullying Ian when he randomly went off at him for no reason the other day #imacelebrity #imaceleb

i would be livid if he went and had a nap because he couldnt be arsed to do his dishes as well! Its not like hes got anything else to do for the rest of the day #ImACeleb

Others however defended Ian and James, tweeting: “I actually cant believe people think Ian and James are bullying Andrew?

“I would be livid if he went and had a nap because he couldnt be arsed to do his dishes as well!

“Its not like hes got anything else to do for the rest of the day.”

Coronation Street’s Sue Cleaver reveals she was knocked out cold on set in fight...

I’m A Celebrity’s Naughty Boy has face of thunder as he’s voted to do...