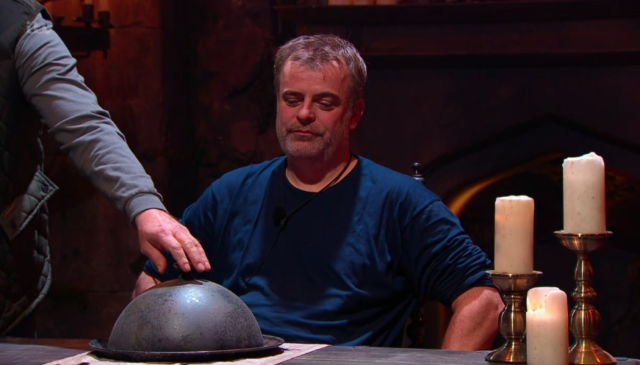 I’M A Celebrity viewers all have the same complaint about Simon Gregson’s controversial final meal on tonight’s finale.

The last supper is the celebrities’ chance to order their favourite meal of all time after weeks of subsisting on rice and beans rations.

But the Coronation Street actor left viewers scratching their heads when he ordered a controversial meal choice.

Speaking to Ant and Dec of reaching the final, Simon said: “Wow, you know, got
down to the final three, so obviously been making the right trumping noises.”

As Ant and Dec questioned his choice, Simon added: “Peppercorn sauce with lamb, you’ve made me think now…”

Simon had to face the final eating trial to win his strange choice of main meal.

As he faced his first dish of the Trial – a pig’s eye – Simon joked: “Have you got any
peppercorn sauce?”

And viewers were shocked by the unusual culinary pairing.

Peppercorn sauce with lamb?? What fresh sacrilege is that?! #ImACeleb #ImACelebrity

He said after: “Tasted like you’ve left a pork scratching in your pocket for a
week.”

Next up in an I’m A Celebrity first, he had goat tongue and Dec joked: “Any feedback is gratefully received.”

Simon laughed: “The feedback, you may want to stand back. I’ve got a very
delicate constitution.”

Next was Fermented Castle Gruel, which was made up of fermented egg, tofu,
plums and more.

Dec said: “So just whack the whole bowl down.”

When he’d downed the bowl, Ant checked it and seeing some left said: “Please
Sir, can you have some more…”

Next Simon faced sheep’s penis and in another I’m A Celebrity first Simon was
then served cow’s vagina.

At the end a relieved Simon said: “Oh my goodness, I’ve done it!”

Having successfully won all of their meals, drinks and treats, the three finalists sat down for their food.

On the menu for each was:

Simon: Prawn cocktail, lamb chops, mash and peppercorn sauce on the side, Eton
Mess and chocolate.

Frankie said: “There was this big table with a white cloth on, real cutlery and
glasses! I’ve not drunk out of glass for so long. It just looked like the perfect
romantic meal for three.”

Simon said: “It was absolutely immense!”