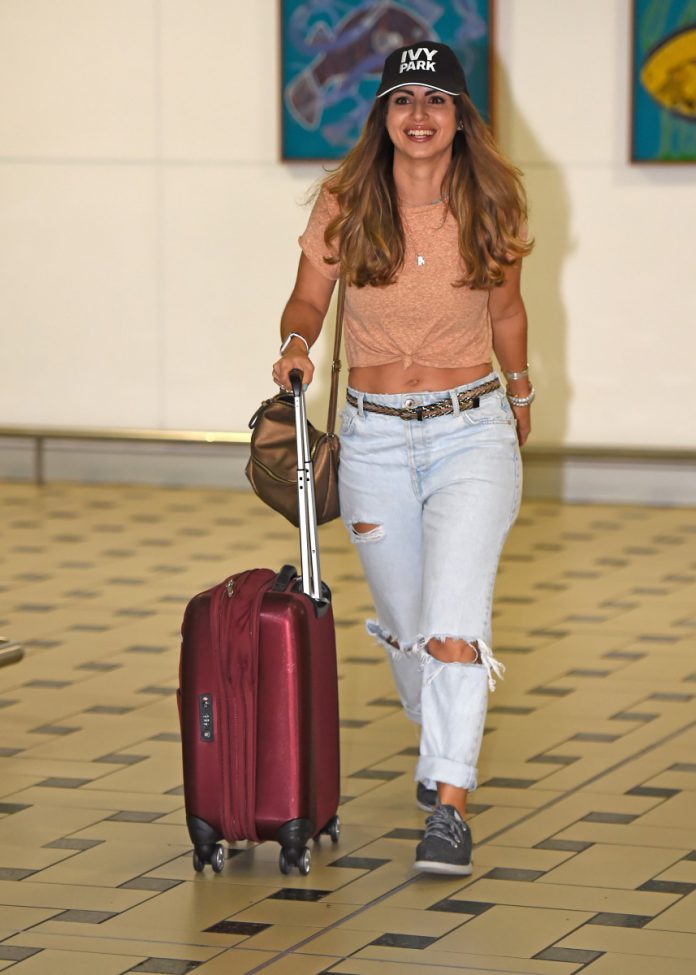 IM A Celebrity star Andrew Maxwells wife has arrived in Australia to support him amid claims hes being bullied.

Suraya El-Wakil was spotted looked very excited as she made her way through Brisbane airport today, dressed in a crop top, baseball cap and ripped jeans.

She was seen greeting Roman Kemps girlfriend before they all headed to their five star hotel.

Andrew, 44, has revealed very little about his personal life and his wife in the past.

The pair married in 2016 and are parents to two children, the youngest of who is two.

He has briefly mentioned her in his stand-up gigs in the past and referenced the fact she is Muslim and of Egyptian heritage.

The comedian has had a tough time in the jungle so far and viewers are concerned he is being targeted by footballer Ian Wright.

The footballer is now facing Ofcom complaints that he is bullying Andrew and things escalated further during yet another row last night.

Meanwhile he campmates’ loved ones have been arriving in Australia over the last dayas the ITV contestants prepare to leave the jungle.

The campers have been enduring life in the Aussie outback for 10 days now, which means that eliminations are looming as the stars fight it out to be crowned King or Queen of the jungle.

Corrie star Andy Whyment’s wife Nichola looked comfortable in an oversized jumper and leggings as she landed in Brisbane.

Roman Kemp’s girlfriend Anne-Sophie Fluri also arrived, with the DJ previously revealing that his luxury item was a mug with a photo of her and their pet pooch printed on it.

Myles Stephenson’s mum and step-dad beamed with pride as they pushed their luggage through the airport, and Ian Wright’s wife Nancy is in Oz ready to greet her husband at the end of the iconic bridge.

Jacqueline Jossa’s husband Dan Osborne was among the first to jump on a plane, defiantly flying over after HOAR Online revealed that Jacqueline had threatened to quit the show after his alleged romance with Gabby Allen.

The ex EastEnders actress was left devastated when campmate Myles told her that he believed Dan DID have an affair with his ex-girlfriend Gabby.

Loved ones for Nadine Coyle, Adele Roberts, James Haskell, Cliff Parasi, and Caitlyn Jenner are still yet to arrive – with fans desperate to see if anybody from Caitlyn’s famous family will be there to greet her when she leaves the show.

Earlier this evening, her model daughter Kendall finally broke her silence on her dad’s jungle stint with a sweet Instagram post.

Brexit minister Lord Frost RESIGNS in protest against Plan B – in huge blow...

How many children does Jacob Rees-Mogg have?