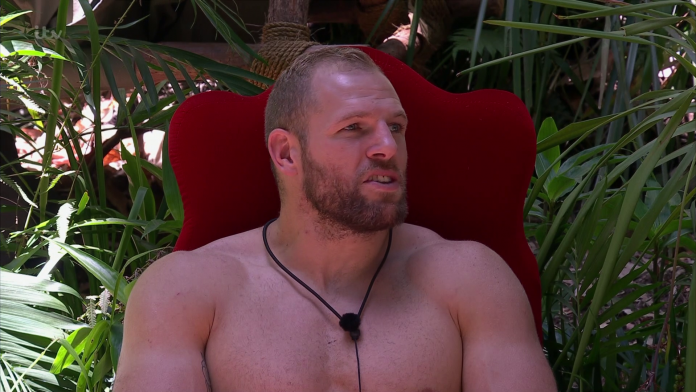 I’M A Celebrity… Get Me Out Of Here! fans have slammed “controlling” James Haskell for lashing out at Andy Whyment, shutting him down in a discussion about the weekend’s roast dinners.

The 38-year-old Coronation Street actor narrowly missed out on the Sunday night treat, alongside Cliff Parisi and Ian Wright.

Desperate to live vicariously through his more lucky campers, Andy has been asking for details about the dinner.

In today’s episode of the ITV reality show, Jacqueline Jossa mentioned how her food had been overpowered by the orange juice, with Andy asking: “Did you get orange juice?”

“You’re going to torture yourself.”

Defending himself to other campmates, James continued: “I’ve literally heard him ask 20 times, I wouldn’t have asked because I can’t have it.

“It doesn’t matter if the whole building was made out of chocolate.”

Dejected Andy replied: “It’s not doing my head, I am just asking what you had last night.”

Reflecting on the altercation in the Bush Telegraph, James admitted that he may have overreacted, explaining: “It’s just my mentality but it could have come across like I was shutting him down a bit.

He later apologised to the actor, who insisted that there were no hard feelings.

Viewers at home were firmly on Andy’s side, slamming the rugby hunk for “disrespecting” his co-star.

One wrote: “Trying to see who the f*ck James thinks he was talking to, disrespecting Andy like that.”

Another added: “Who the hell does James think he is?? Cocky little s**t.”

A third said: “James is passive aggressive. Everyone tip-toeing around him. Call him out someone!”

#imaceleb James is so snakey… has a go at people and shuts them down in front of the whole camp then apologises privately.. to make himself appear amazing . Arrogant!

James is so annoying and a control freak. Let Andy ask as many questions about food as he wants!!!! #ImACeleb pic.twitter.com/gb5jFY8CaR

This is far from James’ first controversial run-in in the jungle, previously clashing with Kate Garraway over chivalry – and even host Declan Donnelly following a failed Bushtucker Trial.

James was clearly devastated when he and Roman Kemp failed to secure three stars during Sunday’s live trial, which many fans have since claimed was a “fix”.

When Dec asked the star what had gone wrong, James snapped: “What was it? It was the very fact there was a giant crab in the way that you wanted me to carefully caress in a different direction as I tried to unscrew a star in its face.”

The Geordie presenter couldn’t resist getting his own back during yesterday’s show, cheekily jibing that it was James’ “sausage fingers” that had actually cost him and Roman the task.

Love Island’s Shaughna Phillips reveals secret 2017 boob job as she opens up about...

Huge 2-mile asteroid will be visible from Earth next month – and is deemed...