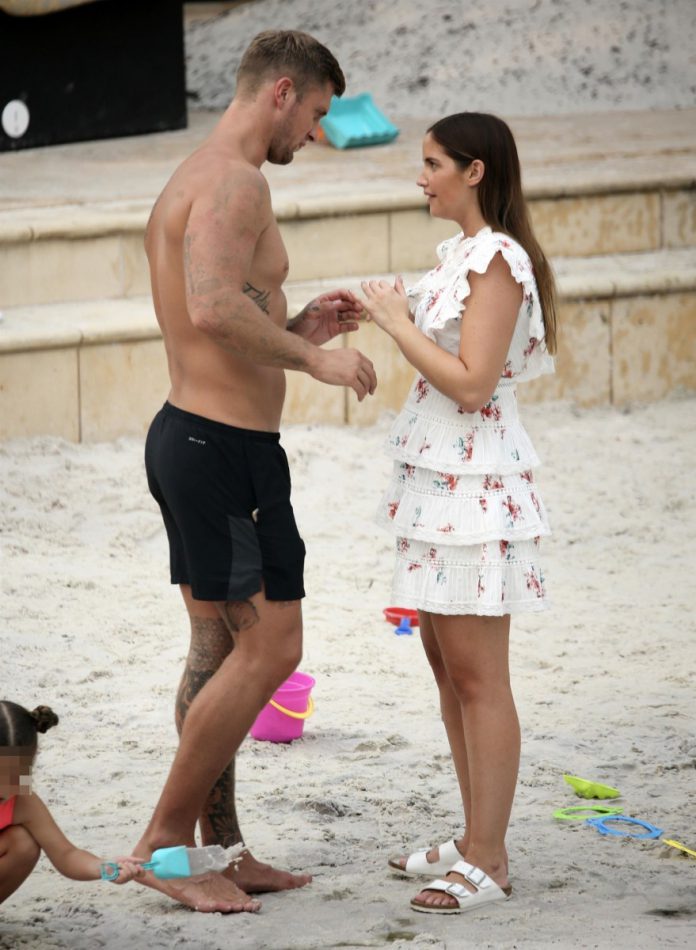 I’M A Celebrity winner Jacqueline Jossa has been pictured having tense talks with her cheating husband Dan Osborne by the pool in Australia.

Dan’s mum Sarah pointed at Dan in a heated chat

During the heart to heart, Dan pulled Jacqueline in to him for a cuddle and he held her hands while gazing intently at her.

The former Towie man’s mum Sarah also had a serious chat with Dan, pointing her finger at him as they sat on a bed in the shade.

Dan and Jac’s kids Mia and Ella played in the sand while the adults talked it out.

Yesterday a social media snap showed Jac’s mum Selina and dad John keeping their distance from Dan on the bus into camp to greet the winners.

And after reuniting with their daughter, Selina posted of her pride without referencing Dan.

Meanwhile, it’s been reported that Jacqueline is the first-ever winner to cancel live TV interviews after details of his threeway romp were revealed.

Dan held Jac’s hands and gazed at her intently

Dan sat on his phone as his mum spoke

Despite previous champions appearing on daytime shows such as Good Morning Britain, Lorraine, This Morning or Loose Women the next day, Jacqueline is said to have refused to go on any.

Instead she wants to spend time with her children after HOAR revealed Dan had a steamy sex tryst with Chloe, 22, and Natalie, 34.

A source told The Mirror: “She has to film for the ‘coming out’ show which airs later this week, so cancelled all other TV offers like GMB and Lorraine to spend more time with the family.

“Jacqueline and Dan spent time together in the hotel and probably had a lot to talk about.”

Guilt-ridden Chloe – who found fame after being kidnapped by a sex trafficking gang while on a modelling assignment in 2017 – revealed she romped with Dan during a wild night out at a London hotel.

She told us last week: I feel so sorry for Jacqueline. She deserves to know what Dan is. Hes making a fool of her.

Jacqueline shared a passionate kiss with Dan after being crowned Queen of the Jungle last night.

She got emotional as she told hosts Ant and Dec how she no longer wanted to be seen as a “doormat” after previously taking cheater Dan back.

Jac said: “It was not what I expected.

“It was a lot harder. I didn’t think it would be such a turning point in life, I went in as one person, I feel like I have come out as a different person. I’ve grown in confidence and found who I am as a person.”

She added: “I think it’s so easy to care so much what other people think of you, trolls, people who say nasty things for the sake of it and I try to change their opinion.

“Here you have no choice, you have to be you. Here I have different people bigging me up of different ages, I can’t really work out what is happening.

“I’ve always been known as Lauren from EastEnders, or a doormat, or whatever you want to call it, and coming here I have actually proved myself.”

Xbox Game Pass adding 32 NEW titles – how to get ‘Netflix for games’...