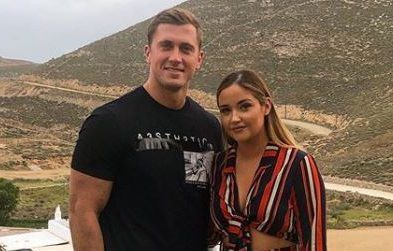 I’M A Celeb bosses axed a reunion between Jacqueline Jossa and Dan Osborne in the wake of his sex-cheat shame.

They planned for the ex-EastEnder to have a jungle encounter with her love-rat hubby on Saturday night’s ITV show.

Brave Jacqueline Jossa, 27, conquered bug-filled Bushtucker Trials but Im A Celeb chiefs feared a jungle meeting with her love-rat husband could break her.

It would have been their first meeting since fellow campmate Myles Stephenson told her Dan, 28, had cheated on her with Love Islands Gabby Allen.

And it would have taken place a day after HOAR told how Dan had a three-in-a-bed sex session with Big Brothers Chloe Ayling and US reality star Natalie Nunn.

But the bosses dramatically axed their plan amid fears that former EastEnders star Jacqueline would break down in tears.

A source said: The visit would have been really awkward for her.

Bosses couldnt give her advance notice as it would ruin the surprise, which is the whole point of the reunion segment.

But if they didnt give her a heads-up and she hated that Dan had been sent in it couldve really upset her.

ITV are all about duty of care. They decided that Dan and Jacquelines first proper conversation since the dramas emerged should be off- camera and not in front of millions of viewers.

Producers were also concerned that the meeting could have put Dan in an awkward position and may have worsened relations between him and Jacquelines devoted parents.

Jungle reunion moments have been a mainstay of previous series.

Last year viewers were left in tears when eventual King of the Jungle Harry Redknapp had a surprise visit from wife Sandra.

Jacqueline threatened to quit this years show after singer Myles, 28, told her he believed Dan had cheated with his ex Gabby, 27.

The actress only remained in the jungle after producers allowed her to indirectly make contact with her husband via voicemail.

Dan flew to Australia earlier than planned and told pals that he was going to knock Myless head off.

But yesterday the duo kept an uneasy public truce at the luxury hotel where stars and their families are staying for tonights final.

Myles, who was evicted from the jungle earlier this week, made the first move in burying the hatchet.

Myles Stephenson told Jacqueline that Dan, 28, had cheated on her with Love Islands Gabby Allen

He approached Dan at the daily screening of the show in the jungle production office in Murwillumbah, New South Wales.

The pair were later seen chatting by the pool of the five-star Palazzo Versace with relatives.

A hotel eyewitness said: They both spoke a good game about knocking seven shades out of each other. But yesterday they acted like adults and had a chat about it.

The display was very pointed and in view of all of the friends and family of other celebs.

It was clear they wanted everyone to know they were being civil. But a pal of Dans said he was only putting it on so Jacqueline could see he was being grown up about the row.

They added: Dan says he (Myles) is a grass and is wary of him. But he knows Jac is close to him so figured hed kill him with kindness

But it might be a different story back in the UK. For now hes trying not to detract from Jacs jungle experience any more than he already has. An ITV spokesman confirmed the camp reunion segment was not happening this year.

An ITV source added: Its not a guaranteed feature.

Sources say they will ensure a duty of care to her starting immediately when shes driven from the jungle to the hotel.

During that 40-minute journey she should be filmed for next Tuesdays jungle coming out show.

A TV crew normally films and records discussions in the car between the celebrity and their closest family member.

Once they arrive at the hotel they are shown press cuttings from their time on the show.

A source revealed: Careful consideration is being given as to how this will work with Jacqueline and Dan, in light of what has happened and been reported on their strained marriage.

EastEnders’ James Farrar appeared in THREE other soaps before BBC fame – with a...