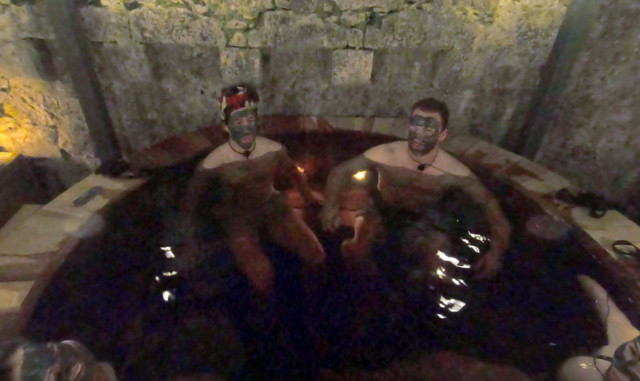 PRODUCERS have installed a hot tub to try to sex up this year’s series — amid complaints it is lacking the waterfall-bathing glamour seen in the jungle.

They are hoping some campmates will be happy to strip down to their smalls and jump into the whirlpool.

So far, the stars have used a bath behind a grim shower curtain at Gwrych Castle on the North Wales coast — a far cry from the torrent at Murwillumbah in New South Wales.

A source said: “Every year in Australia you seen the celebrities lathering up in the waterfall.

“It happens every day and has become a big part of I’m A Celebrity . . . and after 19 series it feels really odd not to have it.

“Moving to an old castle has meant that sort of shot has been difficult to get and some feel the series has suffered as a result.

“The show could do with a slight glamour boost so they decided to bring in the hot tub.

“They’re hoping the sight of some of the celebrities relaxing in the bubbles in their smalls will do so.”

They added: “I can tell you, it was certainly no mean feat to plumb it into a crumbling castle.”

The hot tub was used for the first time last night. The campmates in the challenge — Giovanna Fletcher, 35, Beverley Callard, 63, Jessica Plummer, 28, and Ruthie Henshall. 53 — each got to pick someone to enjoy a spa experience. The ITV show’s producers will be hoping to devise other ways of bringing the hot tub into use.

Past celebs to peel off their grubby gear to enjoy the Oz jungle waterfall have included Myleene Klass, Gemma Atkinson, Vicky Pattison and Katie Price.

However, some female stars have previously refused to “do a Myleene” and get in the shower. Kate Garraway told HOAR that the women campmates made a pact last year to block avoid revealing shots. This year celebs have had to endure an old shower

Lisa Snowdon, a contestant in 2016, said she did not feel comfortable washing under the waterfall.

Before she entered the 19th century castle at Abergele, EastEnders actress Jessica said she was happy she did not have to bathe in a waterfall. But she took four bikinis into the Grade II-listed building.

Referring to Myleene, she said: “She has an incredible body and don’t get me wrong if you’ve got it, flaunt it. I hope that the shower is not completely out there just because the weather’s going to be too cold.

“I hope no-one has to be completely butt-naked in Wales to be honest with you. The only thing we’re allowed to take into camp is four sets of underwear and four sets of swimwear to wash in.” Myleene Klass wowed viewers while showering in the jungle

A TOTAL of 607 viewers have complained to Ofcom about I’m a Celebrity  in a single week.

Some 200 called in to take issue with the use of live animals after Shane Richie, 56, and Jordan North, 30, were lowered into a coffin-like structure containing 30 snakes.

Parents to get 30 hours free childcare until October even if their income has...

Kids returning to school would spread coronavirus in ‘risk to society’, and June 1...