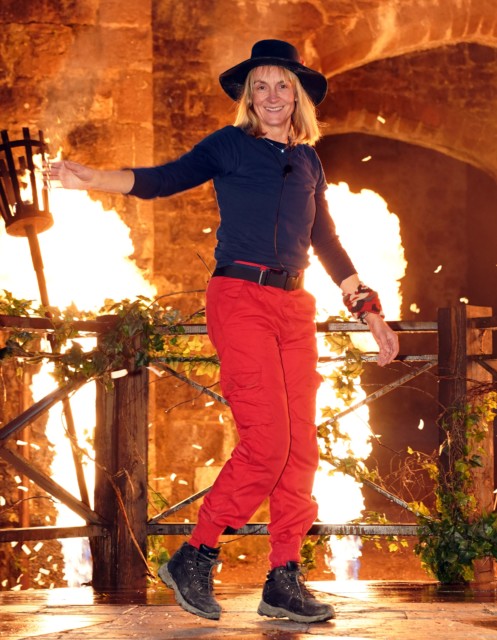 ANGERED I’m A Celebrity… Get Me Out Of Here! viewers have branded the series “sexist” in light of Louise Minchin’s exit, leaving Frankie Bridge the only female in camp.

The broadcaster, 53, became the latest celebrity to be voted out of Gwrych Castle and admitted that said she was “disappointed” that nearly all of the women had been voted off the ITV show.

“There were some great girls and women in there.”

Ant asked: “Will [Frankie] she struggle without you, you think?”

“I think she’s going to find it tough, but I said top her ‘go with it’ so hopefully she will,” Louise added.

“She can stay strong, she’s incredible, she gets anxious but she’s absolutely incredible and I hope she can just get through these last two days.”

In light of Louise’s exit, furious viewers took to Twitter and one wrote: “frankie’s the only girl in camp wow i’m a celebrity is sexist lmao” (sic).

“VERY disappointing to see most of the women voted out of
@imacelebrity,” another viewer remarked.

“Just out of curiosity, why is there only one woman left?” a viewer commented.

“Why are all the women getting voted off? Only one man got voted out and it was NB…#ImAceleb.”

Another said: “I can’t understand why every single year, it’s always the women that go first. Snoochie and Kadeena should still be here”.

“Why are all the women going #ImACeleb,” a viewer questioned.

The fifth contestant to go, excited Louise skipped out of the castle on her way to see the show hosts.

“I can’t wait to go home,” admitted Louise. “I didn’t want to go home, but now I am going home, I’m super excited.”

She thanked fans for keeping her in for 17 days.

“I’ve learnt so much about myself and other people,” said Louise. “I’ve learnt how to get on in tough circumstances. It’s been life-changing. Family above all.”

Louise also moaned about the “egos” in camp – and teased an argument in camp that will air on Friday night.

“There were grumbles today about chores. I’ve done lots of chores so I was surprised by that.”

Quizzed by Ant on who was at the centre of the row, Louise said: “I think you’ll see. There were really quite a lot of grumbles in there today.

“I’m a people pleaser and want to keep people happy, but you just can’t. You can’t keep everyone happy all of the time.”