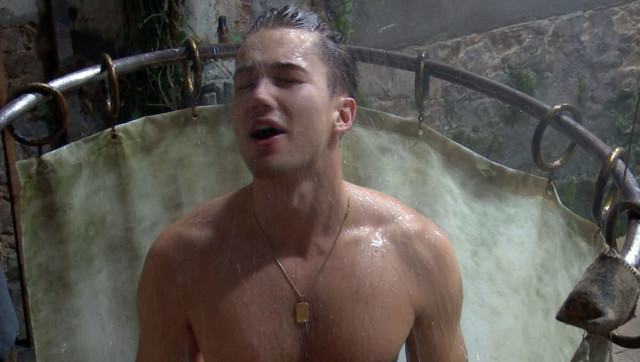 AJ Pritchard stripped off in the I’m A Celebrity camp

“OK, so we had heat lamps above, and you probably couldn’t see on camera,” said AJ.

“So the heat lamps would maybe turn on at about 2am and about 5am to make it feel warm in the sleeping areas.

“So one night I went to bed thinking, ‘Oh My God I’m going to be absolutely freezing’, so I put on a million layers, and had a hot flush at 4 or 5am.”

Curtis, 24, couldn’t hide his surprise and felt the camp dynamic would have been very different had the celebs been forced to endure cold temperatures every night.

He revealed there were secret heaters in the bedroom

He said: “No I don’t think they should have put the heat lamps in there.

Despite the addition of heat lamps, AJ insisted conditions were still tough.

“It was cold,” he said. “I always had my long johns on but, yeah, one or two days you would wear, for example, long johns, trousers, top…”

Curtis then joked: “You were sleeping naked one night weren’t you?”

Elsewhere in their conversation, AJ said he had to “make a stand” in his washing-up row with Shane Richie in order to stop the actor walking all over him.

The former Strictly star, 26, had a few prickly moments with Shane in camp over the cleanliness of the silver mess tins. Speaking on AJ vs Curtis podcast, AJ explained why he felt it was important to take Shane to task when the actor didn’t stay on top of the washing up.

He said told his brother: “Curt, if you don’t stand your ground in those situations people are just gonna walk over you.

“I may be small, but I’m still going to give my opinion.”

Curtis backed him, responding: “You were right to, and you know what, that was one of the only moments when people weren’t laughing when it happened. So I think everyone was on your side with that one, AJ.” Curtis Pritchard backed his brother in the row over the dishes

Earlier in the chat, AJ said he thought Shane was a “good guy and great storyteller”, and put part of their beef down to his own fixation on hygiene as well as when washing up took place, often at 3 or 4am.

AJ had a face like thunder when Shane threw his dinner canteen down on the floor after polishing off his meal in the early hours of the morning.

It came after the actor was shown looking unimpressed when AJ publicly criticised his washing-up skills – and scrubbed all the containers Shane had already done. Tensions boiled over as Shane chucked his dish on the floor in triumph after AJ was forced to take over cleaning duties.

Shane’s dish crashed to the ground, and AJ looked ready to blow. He re-washed the mess tins after Shane had scrubbed them

As the other campers giggled, AJ failed to crack a smile and instead he ordered Shane to “put it by the bucket”.

However, AJ’s girlfriend Abbie Quinnen has since admitted he “has got OCD” when it comes to cleaning, and regularly re-cleans their flat after she has gone over it.

EastEnders fans horrified as Linda Carter demands a divorce from Mick just like...