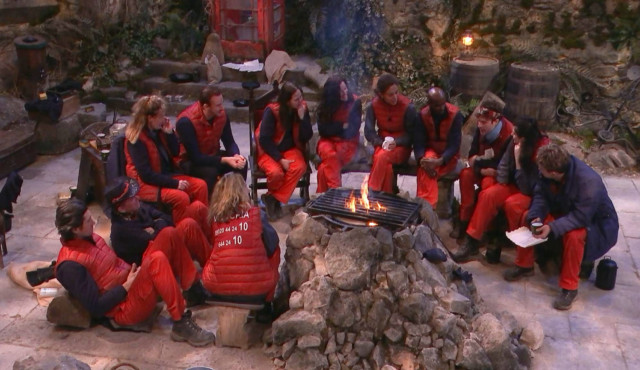 I’M A Celebrity will wave goodbye to its first campmate tonight.

Phone lines for the first elimination were opened last night – one week before the show finale.

“You’re voting for the celebrities you want to keep in the camp. We’re back tomorrow when we reveal the first celebrity to leave.”

Viewers seem to think Hollie Arnold and Ruthie Henshall are most in danger.

One predicted: “Omg first vote off tomorrow I can see it being Hollie #ImACeleb.”

A second shared: “Voteoff begins tomorrow. Russell and Ruthie gone quiet lately, might be in danger I think #imacelebrity.”

The I’m a Celebrity final will air next Friday

Another said: “I think the voteoff will be between aj, gi and mbe! #ImaCeleb.”

The ITV reality show had to move to Wales this year due to the coronavirus pandemic, and while it might feel for some like the series has only just started, the end is already in sight.

The show began on Sunday November 15 and saw the likes of Shane Richie, Beverley Callard and Vernon Kay head to Gwyrch Castle in Wales.

One of the celebs will be crowned the first King or Queen of the Castle – as opposed to the jungle.

And that decision will be made in a week, as the final has been confirmed to air on Friday, December 4.

The finale will air at 9pm on ITV and the episode will be one hour and 35 minutes long. Jordan North is currently the bookies favourite to win

Currently, the bookies favourite to win is DJ Jordan North with Ladbrokes giving him evens to win.

Following behind is Vernon at 10/3 and Giovanna Fletcher at 9/2.

Jessica O’Reilly of Ladbrokes said: “Vernon’s odds have taken a dive in the right direction and it’s now looking like a serious three-horse race for glory against Jordan and Giovanna.”

I’ve known Prince Harry since he was a baby – here’s how I can...

Megan Barton-Hanson is ‘beyond happy’ as she shows off her new teeth after jetting...

Cheapest place to buy Cadbury Heroes this week – and it’s not B&M or...

Arsenal fans revel in ‘rattling the Strictly community’ after backlash over voting to save...