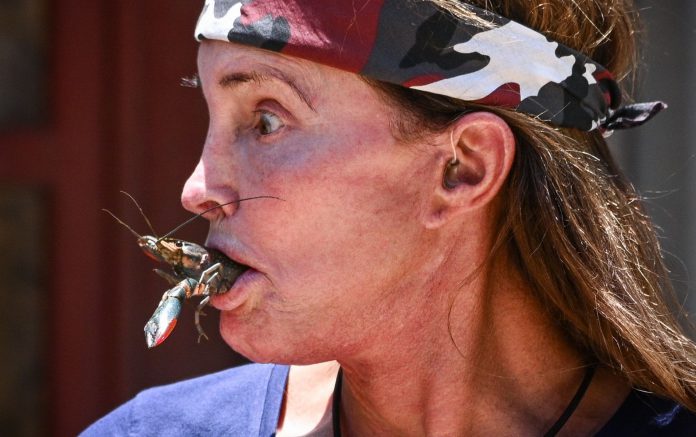 I’M A Celebrity viewers were left disgusted tonight as the campmates held critters in their mouths during the first group Bushtucker Trial.

The sickening trial was called The Pest Office and each of the celebrities from Main Camp were forced to take a live critter in the mouths and hold it there for 60 seconds.

Meanwhile, the celebrities from the Jungle Jail were chucked in a dingy cell in Ol Dingo town.

Andrew Maxwell, Andy Whyment, Kate Garraway, Jacqueline Jossa and Myles Stephenson all stood in line behind bars and had critters – including cockroaches – dumped on them.

Adele Roberts was the first celebrity up and she had to hold a spiny leaf insect in her mouth and won the star.

Next it was Ian Wright’s turn who held six witchetty grubs in his mouth and won the second star.

Cliff Parisi was the next celebrity to attempt to win a star and held beach worms in his mouth – pretending they they were jelly snakes to win a star.

It was Caitlyn Jenner’s turn next and she held a yabbie in her mouth to win another star.

“It’s another day to excel!” the campmates cheered.

“Finally a bit of peace and quiet,” said James Haskell.

Cliff had to hold beach worms in his mouth

The EastEnders star was glad to spit them out

Ian had to go twice in the challenge

Nadine was next and she had to put six cockroaches in her mouth to win another star.

James had to hold a giant burrowing beetle which he managed making a total of six stars.

Roman was the seventh celebrity to hold a critter and he managed to hold a scorpion in his mouth winning the next star.

Next, Ian had to gently hold a huge huntsman spider in his mouth to win another star.

James Haskell had to hold a giant burrowing beetle

The celebs were thrilled to be reunited

The celebs were thrilled to be returning to main camp together

Next the celebs had to eat jungle delicacies.

First up was James and Caitlyn who each had to eat a cow’s eye.

James chomped through his with ease earning another star while Caitlyn gagged and retched but ate hers and they had ten stars for camp.

NextNadine and Adele were picked to eat cow’s anus and they succeeded to win 12 out of 12 stars.

This Morning’s Holly & Phil host Jonathan Van Tam on the sofa for vaccine...