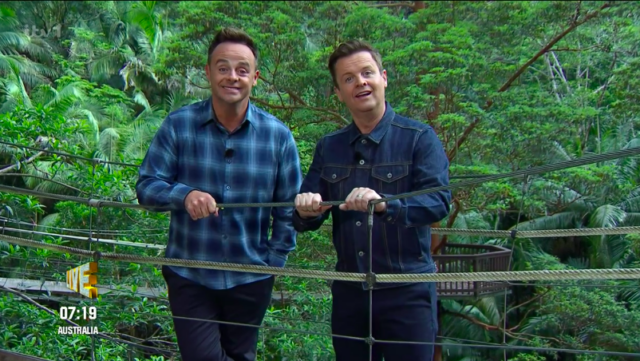 I’M A Celebrity…Get Me Out Of Here! host Declan Donnelly has been left red-faced after accidentally swearing on TV.

Dec and his co-presenter Ant were just wrapping up a live segment when the Geordie said the word “s**t” by mistake.

Dec was dancing along to Boy George‘s Culture Club hit Karma Chameleon when he said: “S***, here’s Seann with news of the next trial.”

Although the TV stars glossed over the faux pas, it didn’t go unnoticed with fans at home.

Someone else answered: “That’s what I thought!”

Dec is likely to have muddled up Seann’s name with the title of the task when he accidentally swore.

England Lioness Jill Scott volunteered to do the trial and was dressed up as the movie’s lead character Truly Scrumptious before being tasked with getting stars from a Chitty Chitty Bang Bang-style car.

The car was suspended high in the jungle and she was covered in critters while doing it.

At the end, Jill fell through a trap door on a bungee cord and also shouted “s***” as she dangled in mid-air.

The campmates were delighted, however, as she returned with seven meal stars.

What year did Holly Willoughby present I’m A Celebrity?

The Queen’s thinly veiled dig at Vladimir Putin after despot kept her waiting for...