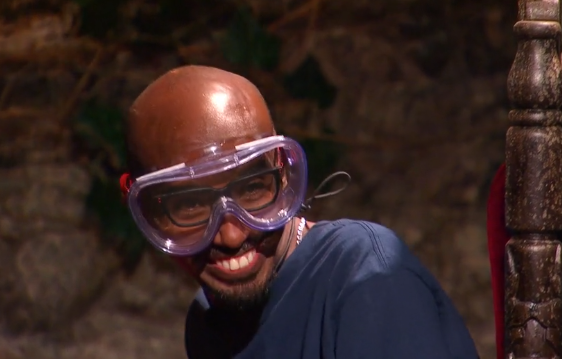 I’M A Celebrity’s Sir Mo Farah shrieks in terror in tonight’s trial and comes close to escaping his chair after being spooked by a leaf.

The Olympic champ is a bag of nerves as Ant and Dec talk him and AJ Pritchard through the Game of Grones rules.

The celebs can be seen sitting back to back upon two thrones stationed on a rotating platform, as they prepare to be showered with all sorts of nasties.

When the hosts ask if they’re sitting comfortably, Mo lets out a whimper.

Ant adds: “A nervous Mo is a very funny Mo.” Ant and Dec find it hilarious AJ also seems to be in a jumpy mood

Just as he’s about to divulge the pair’s strategy, a leaf falls onto Mo’s shoulder from above, making him jump.

“This gonna be brilliant,” giggles Ant.

Last night the celebs rattled out karaoke in the castle’s pub — with Olympic legend Sir Mo getting Gold again.

After enjoying a roast and drinks, Shane Richie kicked off the singalong with The Jam’s A Town Called Malice. Jordan North sang I Will Survive by Gloria Gaynor, while Jessica Plummer did Mariah Carey’s All I Want For Christmas.

Mo duetted with Shane on Spandau Ballet’s Gold, while Giovanna Fletcher and Vernon Kay teamed up on Backstreet Boys’ Everybody.

Meanwhile, Jordan was reduced to tears at Beverley Callard’s departure on Monday night, and had to be comforted by AJ Pritchard.

Nintendo Switch OLED pre-orders – where to buy the new console

Ultimate gaming chair is a giant ROBOT scorpion that ‘cocoons and massages’ you –...

Jacqueline Jossa turns down lucrative TV and magazine interviews to concentrate on her marriage...