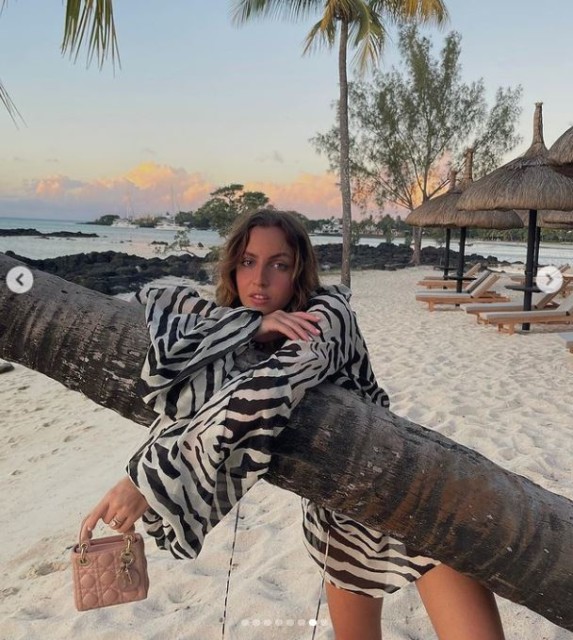 WHILE David Ginola has been battling freezing temperatures and creepy-crawlies on I’m A Celebrity his daughter Carla has been enjoying a five-star break.

The influencer, 27, has taken to social media to give her followers a glimpse of her and her fiancé Adrien Rosenpick jaw-dropping £2,400-a-night stay.

Carla Ginola has been enjoying a £2400-a-night Mauritius stay while her dad battles freezing temperatures on I’m A CelebDavid Ginola, 54, is currently starring on the latest instalment of the ITV series in Gwrych Castle

Carla, whose mum is French model Coraline, recently checked into the LUX* Grand Baie Resort and showed off the luxurious stay on her Instagram.

The idyllic boutique-style hotel is based on the northern shores of Mauritius and boasts three restaurants, fours bars as well as a four pools that look directly onto the Indian Ocean.

Many of Carla’s photos from her trip show off her sensational resort style while posing along on the resort’s white sandy beaches or on a sun lounger.

She also gave her 440,000 followers a glimpse into their lavish suite that sported white walls, a super king sized bed and walk-in wardrobe.

While Carla has been living it up in paradise, her dad David, 54, has been battling plummeting temperatures, tensions and trials on I’m A Celebrity… Get Me Out Of Here!

Last night, David shocked I’m A Celebrity fans when he stormed off to talk to the show’s bosses after rowing with Naughty Boy.

The 40-year-old music producer made yet another enemy in the castle on tonight’s show when he told the football legend he should do the trial.

But the suggestion did not go down well with the former Newcastle megastar, 54, who marched out of camp to talk to producers.

David was seen striding into the room where celebrities record their private thoughts and addressed the show’s bosses.

However, because he was so angry he refused to sit down, cameras initially couldn’t capture his face, with his torso filling the screen instead.

The action switched to a rare sideways shot of the star talking to the show’s bosses as he ranted about the interaction.

David raged: “Listen, it’s very simple. Nobody points at me and says you should do that. I decide for myself. That’s it. Simple as that.

The star took massive exception to Naughty Boy’s suggestion he should do that day’s trial when the campmates were told to agree between themselves who should do the trial.

But the music guru hit back, saying: “There is no need for you to say to me who do I think I am. I’m not allowing this to simmer. I’m not going to sit here and not say how I feel.”

Some sympathised, with one tweeting: “I’m surprised it’s taken David this long to get p**sed of with Naughty Boy tbh.” Carla showed off her jaw-dropping room in one clip In another shot, she posed infront of the resort’s private beach She also modelled a daring sheer mini dress on the beach

Boris Johnson to hold No10 press conference at 6pm TONIGHT to announce triggering of...

I’m A Celeb’s AJ Pritchard is struggling to cope with ‘dirty’ Shane Richie because...