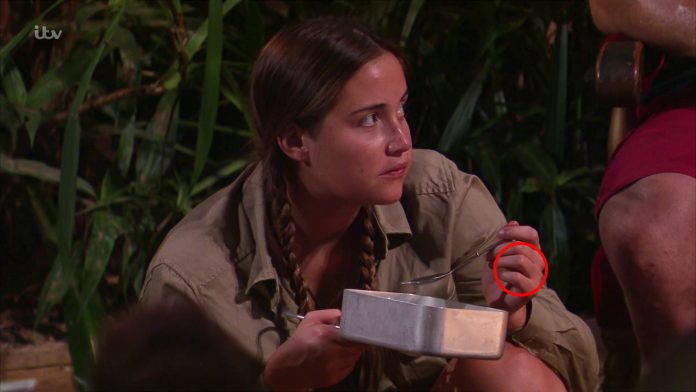 JACQUELINE Jossa is sending husband Dan Osborne ‘a signal’ that she’s furious with him by refusing to put her wedding ring back on – after speculation he cheated on her.

Dan, 28, landed in Australia today to be near his wife and confront Myles Stephenson after the singer claimed he’d slept with his ex Gabby Allen.

Jacqueline had taken off her wedding ring after one week in the jungle whilst others stars, including James Haskell, kept their’s on.

Last night, as she ate dinner with her fellow campers, the symbolic piece of jewellery was still ominously missing from her ring finger.

Jacqueline was in tears when Myles told her his theory, and in scenes not broadcast,Jacqueline, 27,said she did not want to continue without talking to the dad of her two kids.

TheI’m A Celebritystar was then allowed to contact her husband from the jungle after having a meltdown over his alleged infidelity. Former The Only Way Is Essex star Dan was allowed to send a voicemail back as producers decided that as long as they did not speak directly it would not give EastEnders actress Jacqueline any unfair advantage in the ITV show.

But she was later left unimpressed by Dan’s letter sent to the jungle as campmates received messages from loved ones.

And he has now flown to Australia afterangrily slamming Myles, saying he can “try all he wants”with Jac.

A jungle source revealed: Jacqueline was beside herself afterMyles told her what he believed. She was nothing short of hysterical.

“Jacqueline has been fantastic to watch so producers really wanted to avoid a situation where she walked out.

But equally they were very conscious about a duty of care towards her and had to consider her mental state.

Jacqueline and Dan Osbourne in 2017

After allowing her to leave the voicemail, and letting Dan leave one back, she was offered the chance to remain in the show and accepted.

Jacqueline and Dan have been rocked by cheating accusations but friends think her stint on the ITV hit show could help them reconnect just like when Dan went into Celebrity Big Brother.

It comes after HOAR on Sundayrevealed feisty Jacqueline messaged Love Island beautyGabby Allen demanding to know: Did you sleep with my husband?

Number of Brits who beat coronavirus to be published daily to coax people back...