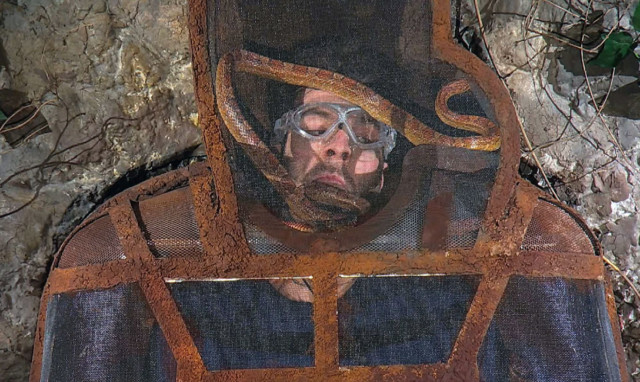 FINALISTS Jordan North, Giovanna Fletcher and Vernon Kay had their final crack at a dreaded trial in last night’s finale.

The three celebs were given a task each which represented a course for the troops’ last supper in camp.

Vernon took on Table of Torment – an endurance challenge in which he had to lie flat shackled on a table for ten minutes as various critters and rotten fruit and veg were placed on him.

Although the TV presenter claimed it was the most “horrific” thing he’d ever done in his entire life, he successfully completed it, winning starters, drinks and treats for camp. Meanwhile Giovanna gave Frightening Feast her best shot in a bid to win the main meals.

First up was a fermented duck egg to which Dec said: “I’ve done this, I’m so sorry, it’s quite bad.”

The edible horrors just kept coming but Giovanna managed to complete it.

Lastly, Jordan took on Iron Maiden as his final challenge to provide the desserts.

He was locked inside a cage for ten minutes as snakes joined him — but the radio host successfully completed the trial.

As he was placed in the cage, Jordan said: “Oh god, it’s a snake. Happy place. Happy place! I’m going to be drinking gin with Bev in Spain.” Ant and Dec squirmed in horror at the final bushtucker trials

Princess Kate and Prince William display ‘telltale signs’ of a couple in love and...

Gogglebox’s Amy Tapper shows off slimmer than ever body in baggy top as she...

Starbucks will give away free coffees to NHS and rail staff tomorrow to say...