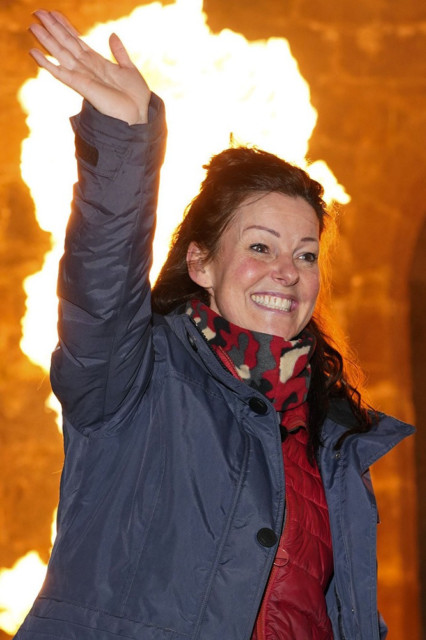 I’M A Celebrity’s Ruthie Henshall has apologised to the Royal family for her slip-of-the-tongue confession about shagging Prince Edward in Buckingham Palace.

Ruthie Henshall made the racy confession on I’m A Celebrity … Get Me Out Of Here!

The exchange saw Ruthie quip to Shane: “You sang in the gardens, I s****ed in the bedrooms.”

And when asked if she was surprised the conversation was being recorded, Ruthie, 53, said: “I had absolutely no idea.

“That was my first day, and I had no idea that was being picked up.

“I said it to make Shane laugh, but you quickly become aware that everything is being recorded and you honestly forget the cameras are there.

“But I mean I was having a good old joke with Shane and it was a bit rude and you know, but it wasn’t supposed to be for everyone’s ears.

Ruthie and the Earl of Wessex dated in the early 90s and enjoyed an on/off relationship for five years.

Speaking to EastEnders star Shane, she added that he was a “lovely bloke” and said: “I genuinely fell in love with him.”

Ruthie revealed she met Prince Edward when he was “a production assistant at Andrew Lloyd Webber’s theatre”, becoming her point of contact after she won the lead role in A Star Is Born. She added: “He was the one who’d call me up and say you’re rehearsing at 2 o’clock or whatever.

“And he said to me ‘would you like to come to mine and watch the film of A Star Is Born with me and you can have some dinner’.”

Ruthie ended up spending the weekend with the Prince in Windsor, where she also met his mother, The Queen, along with Princess Margaret, Prince Charles, The Queen Mother and Princess Diana.

Yet, the royal meeting wasn’t all smooth sailing, having ignore her dad’s advice to curtsy – instead shaking her hand. Ruthie said she ‘genuinely fell in love with’ the Prince

And it got even more difficult, saying: “Margaret goes ‘Yes, yes, oh sing us a song from that show you’re in’.

“I was in Les Mis at the time so I sang I Dreamed A Dream. I must have changed key three times because I was so p****d on martinis.”

Ruthie and Prince Edward ended up spending two years ‘solidly’ together, and another three on and off.

The actress is now a single mum to teenage daughters Lily, 17, and Dolly, 15, and the trio live in Suffolk with their adorable pooch.

Ruthie became the second person to leave I’m A Celebrity last night and she admitted it was the worst castle she’d ever slept in, declaring: “That was brutal.”

I’m A Celebrity … Get Me Out Of Here! continues tonight at 9pm on ITV.

Decentraland guide: How to make money in the play-to-earn crypto game

When did Freddie Mercury die and what was his cause of death?