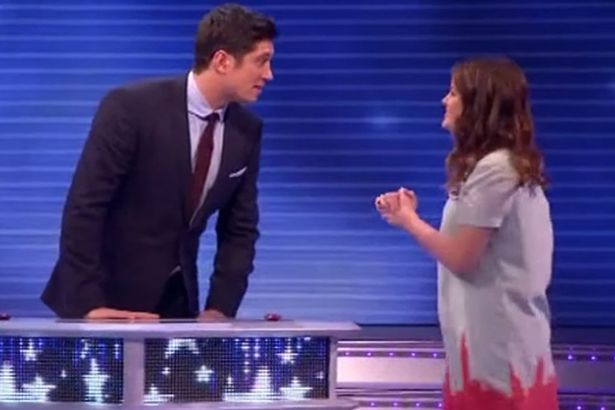 During this series Vernon and Giovanna have formed a tight friendship but unbeknownst to viewers they actually met seven years ago on the ITV show.

Vernon wasn’t impressed with some of Gi’s answers

In an unearthed clip, Giovanna and Vernon’s first meeting didn’t get off to the best start after the mum-of-three picked an obscure answer to one of the questions.

Taking part against EastEnders star Samantha Womack’s family, the podcaster had to name something you would find out about someone from their passport.

Giovanna replied: “Next of kin,” to which Vernon clearly didn’t reckon much to.

Going to the board, a baffled Vernon mockingly asked: “Right…something your passport reveals about you…next of kin.” Certain she was wrong, Vernon turned to the rival team and said: “I’ll be over there in a second.”

Gi was joined on the show by her pop star husband, Tom Fletcher from McFly, and sister Giorgina during an episode of All Star Family Fortunes way back in 2013.

Gi’s answers didn’t get much better as she was later asked to name a kind of vegetable that people grow giant-size for competitions.

The writer replied, with not much confidence, “Butternut squash?” Giovanna was there with her husband Tom and sister Giorgina Gi and Vernon have become great mates in the Castle

Clearly stunned, Vernon gave her a look which caused Giovanna to quail, adding: “Well it’s like a pumpkin, isn’t it? And it can grow big.”

The answer wasn’t the best and Gi ended up losing all her team’s points as her guess was not up on the board.

Vernon, who came third tonight in this year’s I’m A Celebrity, and Giovanna have become firm friends during the show with the dad-of-two calling her “the glue” that held the camp together.

Obviously no hard feelings then!

Did you miss our previous article…
https://www.hellofaread.com/im-a-celebrity/im-a-celebritys-jordan-north-squirms-in-snake-pit-in-scary-final-bushtucker-trial/

PS5 in stock NOW at Amazon and EE plus Playstation console restock rumoured at...

No singing or dancing at pubs or bars under fresh laws – or venues...

Tony Blair warns UK must ‘plan for the worst’ of second coronavirus wave in...