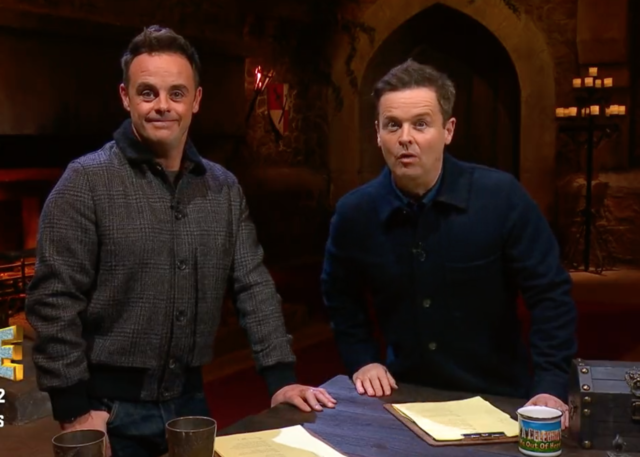 I’M A Celebrity’s Ant and Dec have waded into the Downing Street Christmas Party fiasco with a savage dig at Boris Johnson.

The presenters warned he was the Prime Minister “for now” as they cracked jokes to viewers.

It comes as senior members of the PM’s top team were filmed laughing and referring to “cheese and wine” in a mock press conference held by Allegra Stratton in the No9 briefing room.

In a link to camera, Ant said: “They weren’t celebrating. They categorically weren’t having a party.

“They categorically deny any accusations they had a party.

“And this ‘fictional’ party definitely didn’t involve cheese and wine or a secret santa.”

He then pointed to his eyes and back to the camera lens towards Boris.

In footage of the fake presser, obtained by ITV, one of the PM’s advisers asked: “I’ve just seen reports on Twitter that there was a Downing Street Christmas party on Friday night, do you recognise those reports?”

The Met Police said it was reviewing footage of Downing Street staff laughing and will consider whether of not to investigate a breach of lockdown rules.

Ms Stratton joked: “I went home!” before she paused to consider how to respond.

The aide added: “Would the prime minister condone having a Christmas party?”

Ms Stratton, who was due to lead daily political press briefings in the £2.5million press room before the plan was ditched earlier this year, laughed and replied: “what’s the answer?”

Another No10 staffer popped up to say: “It wasn’t a party, it was cheese and wine.”

Downing Street said in response to the leaked footage tonight: “There was no Christmas party. Covid rules have been followed at all times.”

Did you miss our previous article…
https://www.hellofaread.com/im-a-celebrity/im-a-celeb-shock-as-snoochie-shy-brutally-kicked-out-of-camp-and-fans-are-fuming/

Government unveils package of support to help high streets as they reopen for the...