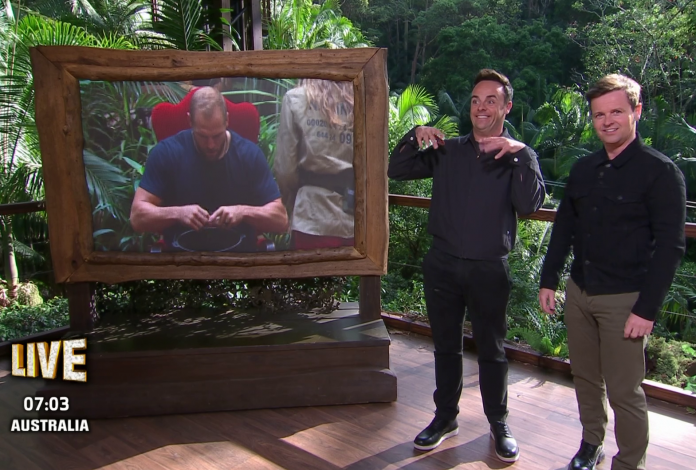 ANT and Dec lashed out at James Haskell’s “sausage fingers” as they blamed him for failing yesterday’s controversial Bushtucker Trial.

Furious I’m A Celebrity… Get Me Out Of Here! fans slammed the ITV show in a fix row – claiming that James and Roman Kemp had no chance of completing the live challenge.

After defending the task on Twitter earlier today, the Geordie presenters couldn’t resist making another jibe at rugby player James.

Referencing the hunk’s snipe at Dec after he failed the challenge, the presenter said: “Did you hear the way he had a go at me yesterday? After the trial?”

He added: “It’s not my fault he couldn’t get his big sausage fingers to unscrew the star!”

James was left fuming when he and Roman ran out of time in the Love Island-themed challenge, meaning that three of their campmates wouldn’t be getting a roast dinner treat.

The pair were tasked with laying in a snake-filled bed, with James unscrewing stars in boxes filled with critter while Roman moved it into the corresponding box on the other side.

However, James struggled to get the first star out as a giant crab took up most of the box and started to attack him.

After failing, Dec quipped: “That was unlucky, what was it James?”

Obviously annoyed, James hit back: “What was it? It was the very fact there was a giant crab in the way that you wanted me to carefully caress in a different direction as I tried to unscrew a star in its face.”

It didn’t take long for Twitter to erupt as they demanded justice for James and Roman – insisting that the trial was fixed for the men to lose to cause drama in the camp.

The stand ins did it when we tested it

One tagged Ant and Dec as they complained: “There was no way anyone on this earth could have completed James and Roman’s trial in 90 seconds.

“Be fair and feed the last three will ya?”

The pair simply replied: “The stand-ins did it when we tested it.”

As a result, Andy Whyment, Cliff Parisi, and Ian Wright were the only three campers to not receive a delicious dinner in tonight’s show.

EastEnders fans convined Jean Slater will die from her overdose after bystanders were slow...