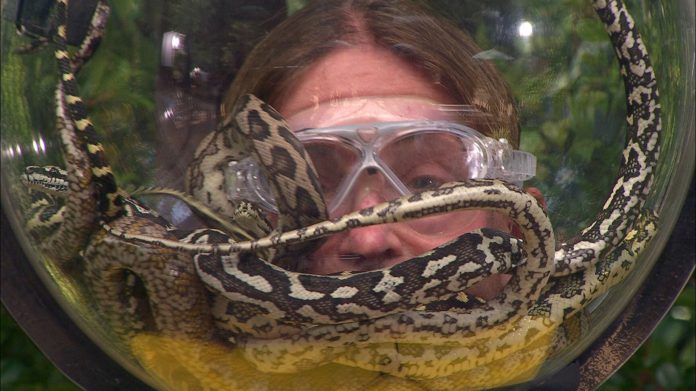 CAITLYN Jenner wears a snake-filled helmet in her second Bushtucker Trial on I’m A Celebrity tonight.

The 70-year-old star struggles to see as the reptiles wrap around her head in the terrifying task.

Snakes can be seen covering Caitlyn’s mouth as her wits are tested again on Tuesday night.

The Keeping Up With The Kardashian star looks alarmed, but her screams are likely muffled by the plastic helmet.

Ex Olympian Caitlyn is also forced to put her hands in a snake filled box as she reaches for yellow stars.

The stars appear to be screwed into the box and Caitlynn’s manicured nails work frantically to twist the nuts.

“You have to keep going, there is a lot more screwing to it.”

Jacqueline is more concerned Caitlyn is about to be bitten as she says: “Brush the snake off slowly, otherwise you’re going to get a little nip.”

Boris Johnson’s on the ropes after being Ant and Decked