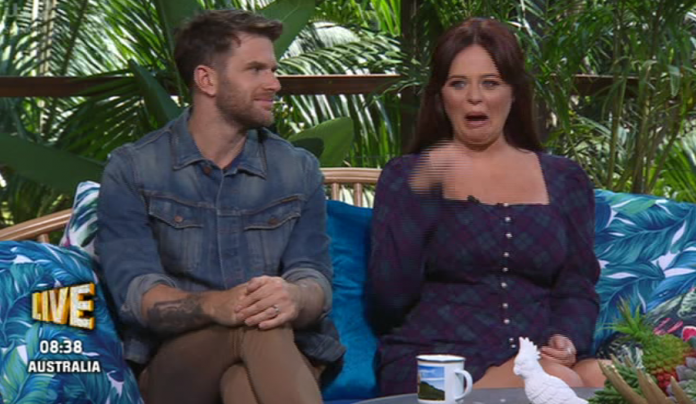 EMILY Atack made a brutal dig at Katie Price on tonight’s Extra Camp.

The presenter, 29, suggested that her co hosts Joel Dommett and Adam Thomas needed to get tested for diseases after they took a dip in the same pool where Katie and ex hubby Peter Andre first canoodled.

The spin-off hosts were doing a tour of the camp in a pre-recorded segment when Joel and Adam decided to dive into a rockpool in their undies.

Joel pointed out to his pal: “This is where Katie price and Peter Andre had fondles.”

He was of course referring back to 2003 when the pair fell in love on the series, and shared a cosy cuddle in that very body of water.

And when the action cut back to the live studio show, Emily scrunched up her face and said: “I hope you boys went to the clinic after being in that pool.”

“Oh yeah, we did,” Joel replied. “And we tested positive for Insania.”

As Emily laughed, Joel then quickly added: “Love you, Peter.”

Insania is a reference to the song Mysterious Girl singer Peter made up in the jungle and went onto release as a single.

It seems like Katie won’t see Emily’s dig at her however as she isn’t watching the show this year.

HOAR revealed earlier today that the former glamour model is refusing to watch Im A Celebrity Get Me Out Of Here this time around after ITV snubbed her offer to appear on it a third time.

Friends claim the 41-year-old has been left so gutted at being snubbed for a jungle return that shell be shoving on a box-set instead.

“The way she sees it she has unfinished business with the programme and would love to go back on it.

Katie and Peter found love on the show

But ITV werent interested. So just like Simon Cowell and the X Factor she got the cold shoulder.

Katie was pretty gutted. And she thinks ITV are missing a trick. She reckons the public would love to see an all-stars version and reckon shed be able to persuade her old friend Kerry [Katona] to take part.

During her second stint in the jungle, Katie famously quit after having to do too many bushtucker trails.

Love Island’s Molly-Mae Hague shows off new super-short hair as she heads out for...

Stacey Solomon gets on her knees and screams as Joe Swash has a flashback...