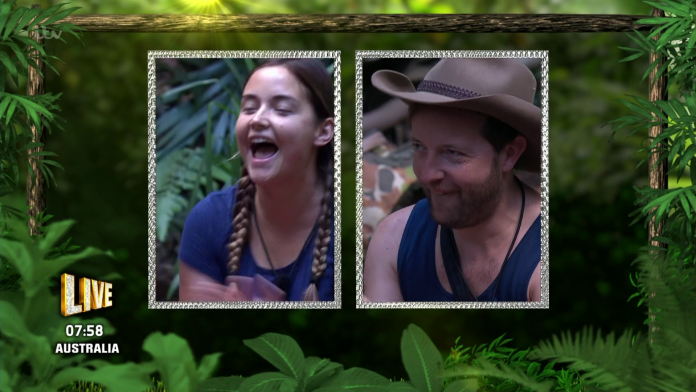 IM A Celebrity fans were left furious last night when Jacqueline Jossa cheered as Andrew Maxwell was picked to do the terrifying Bushtucker Trial.

The EastEnders actress last week sobbed and shouted “I can’t do it anymore” when she was voted to face her biggest fears.

But after being in the bottom two last night, Jacqueline squealed with relief as Andrew was picked over her.

He will now undertake the Arc of Agony as he comes face to face with large crocodiles.

One viewer said:“Think that Jacquelines reaction to Andrew doing the trial was the bitchiest thing Ive seen this year. Cant wait for her to go #ImACeleb.”

Another added: “Jacqueline is actually borderline bullying Andrew. She is kind of a b***h for real…”

Someone else said: “How rude is Jacqueline, cheering like that because Andrew was voted for the trial! I absolutely can not stand her#ImACeleb.”

A fan remarked: “Jacqueline cheering when Andrew was chosen was a bit s**t considering her getting chosen drove her to tears #ImACeleb.”

HOAR revealed a teaser from tonight’s episode showing the moment Andrew is attacked by a crocodile.

As he reaches in to a cage to try and move the beasts out of the way, one of the crocs snaps at his hand.

It’s the latest blow for Andrew whothreatened to walk outearlier this week in an emotional chat with Jacqueline Jossa.

The exhaustion got the better of the Ex On the Beach narrator, causing him to break down in tears.

But in tonight’s clip he is seen using comedy to get through the ordeal as he uses an Australian accent throughout.

“Crocodiles, good day sporto, going to be real gentle with you boys. Alright?” he quips as he sticks a hand in their cage.

Why Kate Middleton wears three rings on her wedding finger

What time is the RAF flypast for Trooping the Colour 2021?