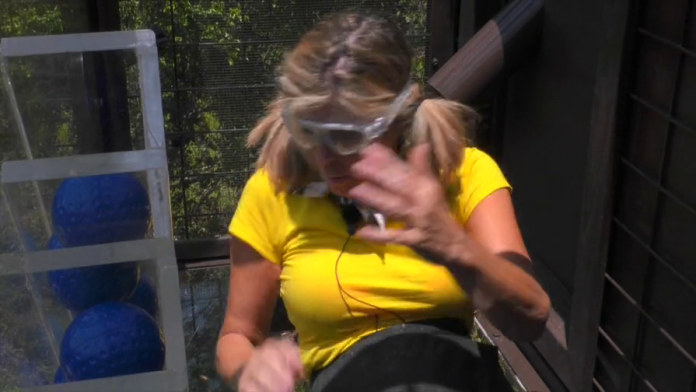 IM A Celebritys Kate Garraway screamed in terror as she took part in the first BushTucker trial alongside a very calm Caitlyn Jenner.

In scenes that will air this evening the GMB host is seen wailing as cockroaches fall on her head during Bugged off.

The scary challenge see the celebs suspended high above the ground in boxes filled with 50,000 creepy crawlies and 25 rats.

They then had to drop balls into baskets floating in the water below.

As the roaches kept failing, Kate yelled: Oh no, oh no. There are so many of them.

But while Kate couldnt stop squirming, Caitlyn took it in her stride and described them as friends.

The pair were competing to win stars for camp in order to get some better food for those who aren’t ‘power couples’.

Last night Kate looked horrified as Ant and Dec revealed she would be doing the first trial alongside Caitlyn.

It is no surprise she looked so scared as just days before she had admitted that being locked in a small box with creepy crawlies was her ultimate fear.

Speaking toHello magazinejust days before jetting to Australia, she said: “I am terrified of all of the things in the Jungle, especially heights it is the crazy heights on thin bits suspended on bits of metal or wood. Or if you are in a little box with creepy crawlies or snakes in it!”

During last night’s episode Kate again screamed in terror as she had to walk the plant which was suspended 334 feet in the air.

As the wind picked up, Kate admitted she was not sure she could do it.

“I can’t do it, I’m falling,” she yelled as she took a few tentative steps. “It’s really windy.”

Urged on by her partner Andrew Maxwell, she made it to the ladder but struggled to let go until the rest of the contestants cheered her on.

Kate screamed with joy as she finally made it back to the roof.

“Your legs are like jelly,” she said. “But I really nearly screamed to get off there, I just thought, ‘I can’t do it’.”