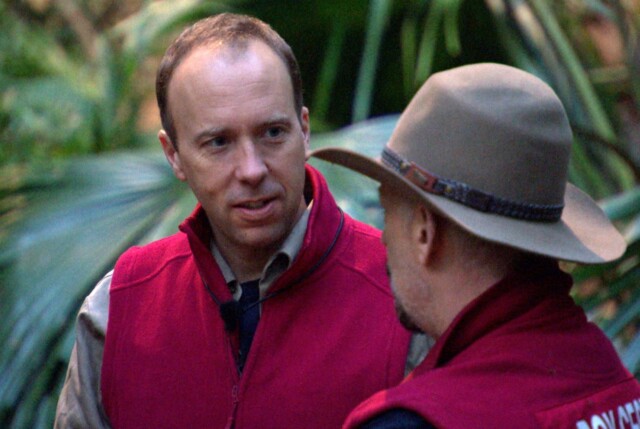 A BODY language expert has revealed why Matt Hancock isn’t being authentic on I’m A Celebrity… Get Me Out of Here.

The former Health Secretary has been a huge topic of conversation during his stint in the jungle.

Matt, 44, was sacked from his Secretary of State role during the coronavirus pandemic for breaking Covid rules with his aide Gina Coladangelo.

The UK were then left shocked when it was revealed that he was to be one of this year’s contestants on the ITV show.

His stint in the jungle has left viewers divided – and now expert Darren Stanton has revealed that he’s not being authentic.

Speaking on behalf of Betfair Casino, Darren said: “One of the most surprising characters in the jungle has been Matt.

“He was met with a lot of emotional anger, understandably, from most of the celebrities.

“However, both the campmates and the public have seen a different side to the former health secretary.

“On a humanistic level, he is trying to be open and push aside the ego and bravado he has previously shown, however, there have been moments where he is still falling short of this, like taking more than his share of food, irking the rest of camp.

“These chinks in his armour are behavioural traits that are leading campmates to believe Matt is being disingenuous and his campmates, forced to spend every hour of every day with him, are seeing through this facade.

“It’s going to be interesting to see whether Matt can remain authentic to the person he is now proposing to be or whether we will continue to see leakage from his inauthentic behaviour that suggests otherwise.”

After Matt’s place on the show came to light, he was suspended from the Conservative party.

He has also been suspended from the party whip – a disciplinary move in parliament which means he has been kicked out of the Conservative Party but remains an MP.

I’m A Celebrity has been hit with thousands of complaints surrounding the show’s most controversial campmate ever – Matt Hancock.

Broadcasting regulator Ofcom has so far received 3, 287 complaints relating to his inclusion in the jungle AND the treatment of the former health secretary.

With four days to go until the final, viewers still haven’t warmed to him being there and 1,764 unhappy fans have felt strongly enough to write to the regulator.

He has however gained a legion of fans, and the majority of the other complaints relate to fans thinking Matt is being bullied in the jungle.

In a statement about the figures, Ofcom said: “It’s worth being aware that under our rules – and taking into account freedom of expression – there’s no ban on any particular person taking part in programmes.

“However, if the mere presence of a person is likely to cause offence, we would expect broadcasters to take steps to mitigate or justify that offence. How they do that editorially, is up to them.”

UK Covid hospitalisations rise by more than 500 for 3rd day in a row...

Katie Price’s fiance Carl Woods hits back after being slammed by fan and insists...

Soap stars who dated actors from rival shows – from Michelle Keegan to Gemma...