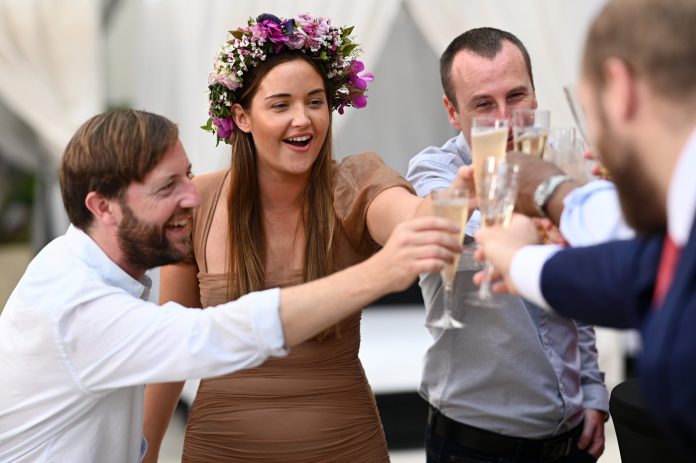 THE Im A Celebrity cast of 2019 were in the mood to party after heading back to the jungle to watch Jacqueline Jossa get crowned queen.

Getting dressed up to the nines, the campmates sunk champagne and mingled with their family and friends at the swanky Palazzo Versace hotel.

The celebs started their celebrations early as they were spotted downing champagne as the final took place before stealing Jacquelines winning staff for a series of pictures.

In behind-the-scenes shots, shared by the cast, they were seen all getting along swimmingly.

Other pictures show them all enjoying breakfast together as they watched the drama unfold.

Kate Garraway cosied up to Andrew Maxwell and wore a hat featuring his catch phrase “My love” on it.

Despite previous champions appearing on daytime shows such as Good Morning Britain, Lorraine, This Morning or Loose Women the next day, Jacqueline is said to have refused to go on any.

Instead she wants to spend time with her children after HOAR revealed her love rat husband Dan Osborne had asteamy sex trystwith his Celebrity Big Brother co-stars, Chloe Ayling, 22 and Natalie Nunn, 34.

A source toldThe Mirror: “She has to film for the ‘coming out’ show which airs later this week, so cancelled all other TV offers like GMB and Lorraine to spend more time with the family.

“Jacqueline and Dan spent time together in the hotel and probably had a lot to talk about.”

EastEnders legend Dean Gaffney, 44, reveals he’s set to be a grandad for...

Emmerdale fans seriously distracted during Faith Dingle’s funeral – but can you spot why?