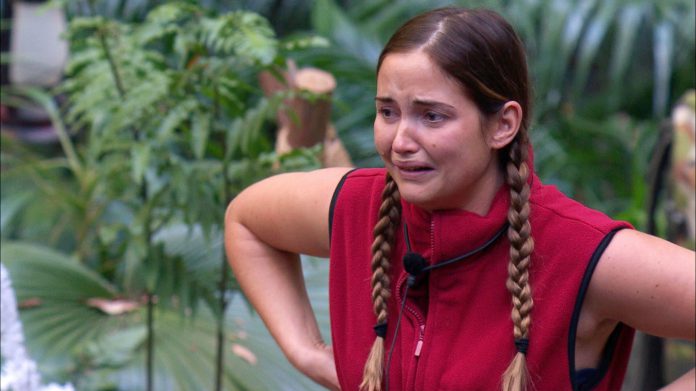 JACQUELINE Jossa broke down in tears on I’m A Celeb tonight as she reflected on James Haskell leaving the jungle.

Therugby player, 34, got the boot from the jungle last night and the campmates were upset as they woke up without him this morning.

Jacqueline sobbed: “He was definitely one of my favourite people in here, I felt like I had a big brother in here, it was so nice.”

As they waved him off Caitlyn Jenner said: “This game sucks.”

Minutes later though Roman was in tears and was comforted by Jacqueline.

“He was someone that I spoke to, I feel I dont have that person now,” Roman reflected.

“I had a real moment when James left because I realised Id made a really good friend, it was a happy moment but also a sad one.”

Ian Wright said: “James leaving has ripped the heart out of the camp, hes supported every person in the camp and its a devastating blow and hes left a void that wont be filled.”

Last night James became the fourth person to be eliminated from the jungle.

The rugby player went up against Ian Wright but Ant and Dec announced it was James who had received the lowest amount of votes from the public.

As he arrived to speak to the hosts, James admitted he was a bit tearful to leave his new pals.

The 34-year-old said: “I got quite emotional, I thought there’s no way I’m going to well up here but I did.”

Explaining why he went on the show despite having seen very little of it, James said he had friends who had said it was an experience of a lifetime, and added after years of playing sports: “I wanted to reset myself.”

He continued: “I’ve learnt a lot about myself and realised I enjoyed helping other people.

“In sport you go to some dark places, there’s a bit of suffering so I was equipped to deal with those things whereas other people weren’t so I found a role.

“I can’t cook, I’m probably not the funniest, I can’t sing and dance like Jac and Myles, I’m not as well informed as Kate so I found a role.”

Ant and Dec couldn’t help but ask him about how ‘ratty’ he was at times in camp as he struggled with the lack of food.

James admitted: “I think I would have been ratty if I was fully fed. The Dingo Dollar Challenge is a 50-50 question and they want to have this debate and powerpoint presentation.

“When we come to it, it is put your hand up for a or b. It is not that hard and you have to cut through the nonsense.”

Asked who he wanted to win, James said Jacqueline Jossa, explaining: “She came in and wanted to do it for herself.

“I didn’t know much about the other celebs and I didn’t want to pry, but I think she’s had a tough time and I want her to prove herself wrong.”

James was greeted by tearful wife Chloe Madeley following his interview with Ant and Dec.

His departure comes a day after Cliff Parisi left the camp.

Adele Roberts was the first celebrity to be voted off the ITV show on Friday, followed by Andrew Maxwell on Sunday.

There will be an elimination every day until Sunday’s grand finale.

Kate Middleton praises teachers for being a ‘lifeline’ to families & begs them to...

Who is Roman Kemps girlfriend and how long have they been dating?

Anger at Boris Johnson’s social care plans as homes may still have to be...