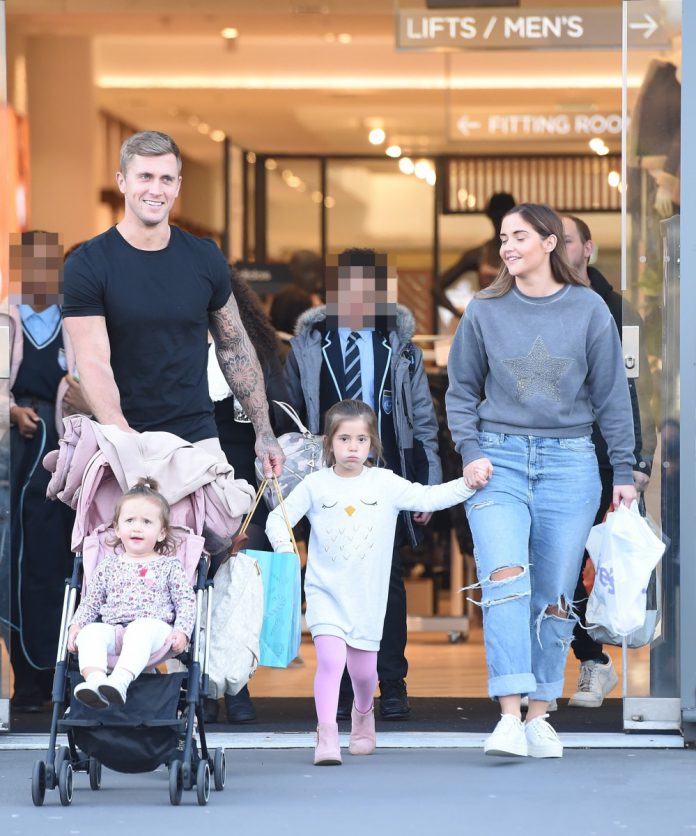 JACQUELINE Jossa was all smiles today as she went Christmas shopping with her husband Dan Osborne and the kids.

The Queen of the Jungle looked like she couldn’t be happier to be back to normality after her stunt in the jungle.

Wearing a pair of high-waisted jeans, the 27-year-old showed off her slimmer figure after three weeks of eating rice and beans.

She nodded to her new time on I’m A Celeb with a jumper emblazoned with a gold star.

Jacqueline chatted happily to her husband of two years as she held her four-year-old daughter Ella’s hand.

Meanwhile, Dan pushed one-year-old Mia in her pushchair as they picked up Christmas presents in Lakeside shopping centre in Kent.

Last night Jacqueline was left reeling on the I’m A Celebrity’s Coming Out show when she learned about husband Dan’s betrayal.

The Queen of the Jungle asked her husband the question she’s been dying to know… had he told fans to vote for her to do trials?

And she was shocked to learn that the father of her two children had betrayed her by telling fans to vote for her.

“Did you tell people to vote for me to do the trials?” she asked.
“Only once,” he admitted.

As they drove away from the jungle she said: “The hardest part was missing you.”

But viewers admitted the scenes made them cringe as they were reminded of Dan’s actual betrayal.

Another wrote: “Dodgy Dan” while another remarked: “Someones really not sitting right about dan.”

And a fourth added: “I feel bad for jac, she deserves better than Dan.”

I feel bad for jac, she deserves better than Dan #ImACeleb

I’m A Celebrity champ Jacqueline has decided to move on from Dan’s latest round of cheating – but has warned “one more strike and you’re out”.

Natalie attacked Chloe on Instagram before telling fans she had arrived in the UK.

“Why don’t u focus on picking ur son up from the door step you dropped him off so you could chase fame!”

Why are people claiming Meghan Markle had a secret first husband Joe Giuliano?