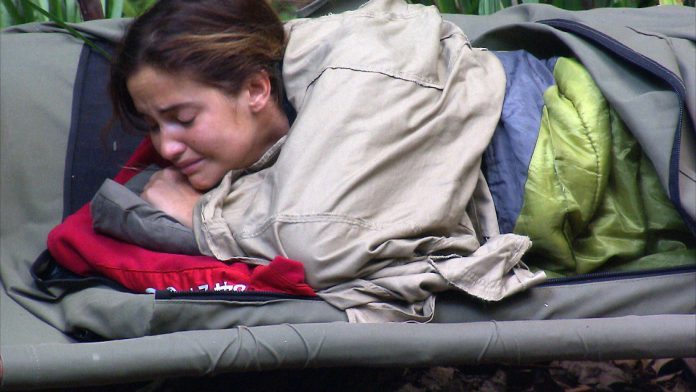 JACQUELINE Jossa’s “proud” cousin says the I’m A Celebrity star will fight through the tears and WIN the show.

Fans of the show have been worried about the ex-Eastenders star’s mental health after seeing her cry before taking part in Bushtucker trials.

But her best friend and cousin, Crystal Palace footballer Ciara Watling, said Jacqueline knew she’d struggle and would likely shed a few tears, telling ITV’s Lorraine today: “She’s amazing … She’s got so many fears with the spiders and heights.

“I think she didn’t help herself showing the world how scared she was, so people are voting for her to do the trials. But she’s surprising herself going out there smashing it.

“She did say before she went in ‘I don’t want people to think I am the crier. I don’t want to be seen as that person.’”

However, she insisted the mum-of-two has it in her to get to the final, adding: “She is such an honest person, she is really being herself … as her best friend and cousin I know how fun she is going to get. She’s going to get even better the longer she stays in there … I really hope she stays in and she can win it.”

Jacqueline broke down in tears when she was forced to do another challenge last night.

The EastEnders actress took on the Crevice of Cruelty alongside former Arsenal player Ian Wright.

The task saw the celebrities entering an underground cavern, where they unlocked stars while facing creepy crawlies and reptiles.

However, when the 27-year-old was told she would be facing another trial, she broke down in tears and wailed as she said: “I don’t want to do any more man.”

The other campmates went to comfort her but the reaction has left fans worried – with many begging the public to stop voting for her.

This wasn’t the only time she cried after she wept just moments earlier when the campmates were given their luxury items.

Jacqueline’s was a pillow with photos of her children, Ella, four, and Mia, one.

She had already broken down when she was picked to do the Snake Hotel trial, which she completed alongside Myles Stephenson.

But it was the Face Your Fears trial that really shook the mum-of-two.

Her helmet was filled with spiders as she tried to unscrew stars in a box filled with creepy crawlies.

While she managed to get both stars, after the task she broke down in tears and had to be comforted by the other camp mates again.

Piers Morgan news – Royal family members have THANKED me for standing up to...

Holidaymakers ‘left out of pocket’ and ‘forced to sleep on beaches’ after arriving at...

Keir Starmer to boot out 1,000 far left members from Labour in effort to...