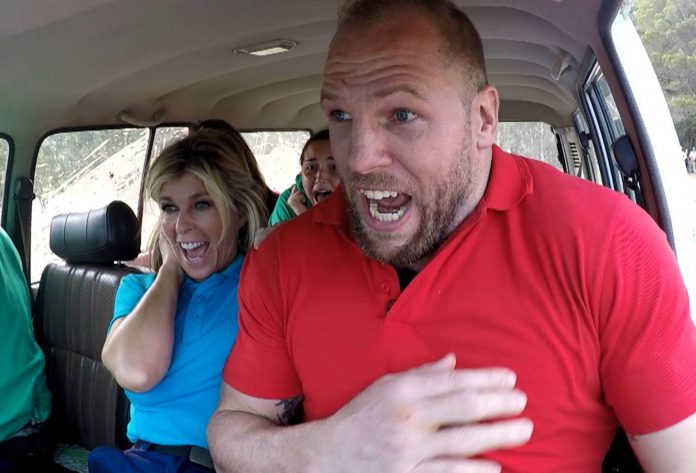 RUGBY hardman James Haskell screams in fear as the new series of Im A Celebrity finally gets under way.

The former sportsman, 34, was joined by Good Morning Britains Kate Garraway, 52, and ex-EastEnders actress Jacqueline Jossa, 27, in a terrifying Jeep ride to Snake Rock camp in Sunday’s nights episode after failing their task.

They will live in the basic camp alongside Caitlyn Jenner, 70, Andrew Maxwell, 44, and 56-year-old Ian Wright, who is still favourite to win.

Meanwhile, Girls Alouds Nadine Coyle, 34, pictured emerging from the ocean, is now in the main camp along with singer Myles Stephenson, 28, and radio DJs Roman Kemp, 26, and Adele Roberts, 40, after they won the entrance task.

The former England international’s wife,who is daughter of legendary TV presenting duo Richard and Judy, has boasted the pair have sex every night, a statistic James failed to dismiss while speaking to HOAR.

Asked how hell cope without intimacy,Jameswho tied the knot with fitness guru Chloe last December said: I think Ill be able to stay calm. When youre on 700 calories and everything smells of smoke, Ill be fine. Ill just throw myself in the creek.

James, capped 77 times by his country and a former captain of club side Wasps, has been involved in top-class rugby since his teens and has taken part in many of the games famed initiations.

But he refuses to reveal if hes experienced anything worse than eating kangeroo anus, which could be on the menu for the infamous Bushtucker trials.

James, 34, failed at his task on Sunday night’s episode