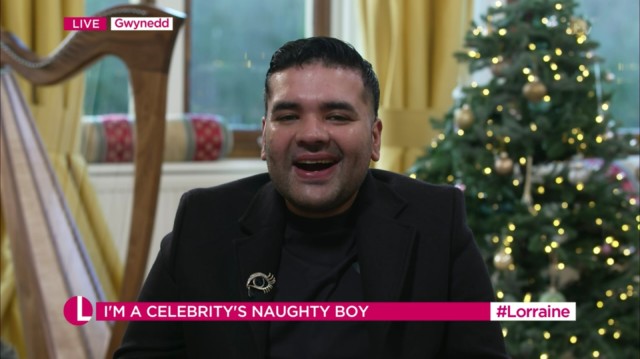 NAUGHTY Boy has revealed he lost a massive 10kg starving on rice and beans during his time on I’m A Celebrity.

The music producer shared the news after he was the latest star to be evicted from the Welsh castle.

Chatting to host Lorraine Kelly this morning, he was keen to tell her the news.

To which Lorraine replied: “No wonder your trousers could not stay up!”

The pair then laughed as they put it down to his diet of rice and beans by the camp fire.

The chart topper was the fourth celebrity to be evicted from the reality show yesterday.

During his time in camp Naughty Boy had arguments with Frankie Bridge and rows with Kadeena Cox over the cooking.

The star also had bust-ups with Adam Woodyatt over the chores and a confrontation with David Ginola for telling him to do a trial.

However, many have defended the star, insisting he was being bullied by some of the others.

Naughty Boy also made repeated threats to quit the show before being convinced to say by others in the castle.

Explaining why he was so particular about the camp cooking, Naughty Boy told Lorraine: “I understand everyone has different kinds of rice, but I prefer the rice that is actually rice.

“It can be stodgy rice and peas [in the camp] – I just wanted to take it up a level.”

Story behind the Queen’s beautiful diamond and turquoise brooch which she wore for coronavirus...