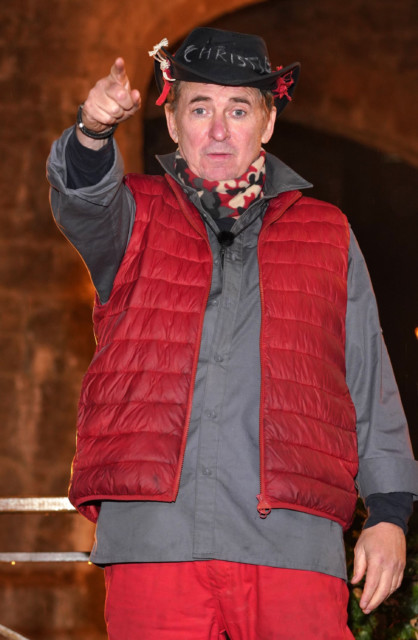 SHANE Richie still insists he wasn’t I’m A Celebrity’s ‘phantom dribbler’ as the celebs look back on their time in camp on tonight’s A Castle Story.

The actor’s campmates are convinced he was responsible for dribbling all over the latrine, and it caused much debate among viewers.

But sticking to his story that he always sat down to wee, Shane says: “They all know it wasn’t me because when the phantom dribbler appeared I was sitting on the toilet because I will ill.”

While celebs AJ Pritchard, Vernon Kay and Beverley Callard one by one name Shane as the man they think is behind the mess.

In sadder news, Shane broke down in tears live on air as he remembered Barbara Windsor.

His campmates are convinced it was him though

Shane co-hosted The One Show tribute to the star, who passed away at the age of 83 last week.

His voice cracked as he remembered how much Barbara cared about EastEnders – and how welcome she made each new cast member feel.

Shane was then shown his first scene with Barbara on EastEnders, and he had his head in his hands afterwards.

Visibly emotional, he recalled how it was Barbara who suggested him to show bosses for the role of Alfie Moon.

The star said: “I got the part and she bought me a big bottle of champagne and said: ‘Welcome to the family’.

“Without her I probably wouldn’t be sitting here today.”

Shane apologised as he fought back tears, failing to speak as he was overcome with emotion. Shane was overcome with emotion as he remembered Barbara Windsor

Later in the programme, Shane declined Alex’s offer for him to read out viewer tributes to Barbara, apologising again as he told her he couldn’t speak.

Shane also revealed that he last heard from his friend last month, with Barbara sending him love and advice before he entered the I’m A Celeb castle.

He explained: “Before I went and did the show in the castle, before they took our phones away in isolation, I got a text from Scott, Barbara’s husband.

“He left a message saying: ‘The Duchess sends her love, just be yourself’.

“That was the last time I heard from her.” Yobs who assault paramedics or police will face twice as long in prison under...

Universal Credit uplift set to be extended while Covid restrictions last and then given...