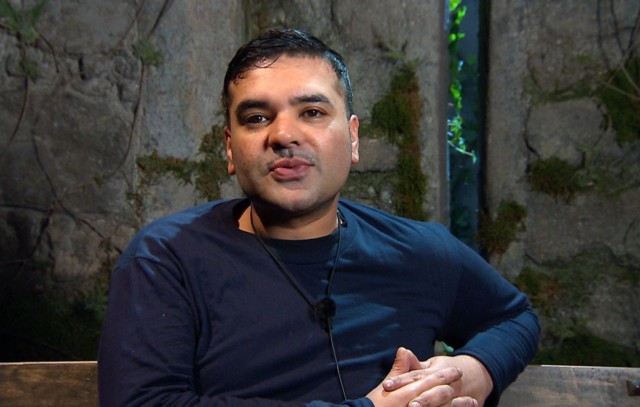 NAUGHTY Boy has shocked campmates with his strops as he struggles to hand over control in the ‘kitchen’.

But HOAR can reveal the emotional reason behind why he is so protective over his cooking after rows with Kadenna Cox.

Naughty Boy is passionate about cooking

The music producer, whose real name is Shahid Khan, shares a special bond with his dementia-stricken mum who taught him to cook.

His niece Aisha said: “Everyone in our family are such foodies, we love food.

“My nan’s food is amazing, but due to dementia and needing 24-hour care she’s not able to cook anymore.

“He [Naughty Boy] and my mum have learnt so many tricks from her. His ultimate goal is to be able cook like her.

“His love for cooking and his passion does come from my nan. He feels it’s his way of connecting with her. We all miss her food, it brings everyone together which we love.”

His family worried as Naughty suffered a breakdown on day three in the Castle.

Aisha says he is “completely overwhelmed, struggling, and paranoid” being away from his mum, who he cares for.

Viewers feared the 36-year-old would quit the ITV series after a series of rows in camp.

But his niece Aisha has insisted that he won’t, although she went on to tell us that she thinks the amount of pressure he puts on himself can be “toxic”.

She said of her famous uncle: “He’s someone who is very paranoid and overthinks a lot. He lacks a lot of self confidence so he was doubting himself, thinking he wouldn’t be able to do it so I was giving him the reassurance he needs.

“The problem is he just needs a lot of reassurance. Obviously he’s not getting that in the castle. Because we know him, we just know he needs someone to say to him ‘you are doing great, you are doing fine’ and he will be back to normal again.

She went on: “He has been like that since he was kid. He has done so well and he still thinks he could do more. He puts a lot of pressure on himself and that’s a good thing and a bad thing – I always say he’s such a Capricorn because they are so work orientated and he always wants to do better.

“I think that can be a bit toxic if you take it too far. He’s just really sensitive and puts a lot of pressure on himself. With a little bit of reassurance he will be back on his feet again.”

Addressing whether or not he will quit the castle, Aisha insisted: “We are not worried he will leave, it’s just us wanting him to know in his mind that everything is OK because he is such an overthinker.

“Even if he just a few hours away from home, he will still keep calling home. The fact that he can’t check up is making him really anxious.

Naughty Boy has struggled on I’m A Celeb FIFA 22: How to start playing early and when you can download the web...

Prince George comforted by dad after cheering with England fans as William declares: ‘you...

The Queen has secret passage hidden behind a mirror in Buckingham Palace so she...