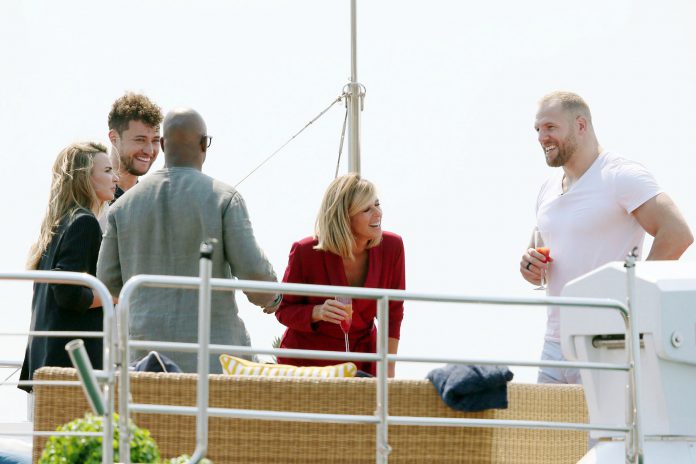 WE are just days into the latest series of I’m A Celebrity: Get Me Out Of Here! and viewers are already loving the current batch of famous names.

But some are already wondering which later comers would soon be joining the campmates in the jungle. Here’s the lowdown…

Who are the late arrivals rumoured to be?

The Coronation Street star was tipped to be entering the jungle as part of the original group.

However, he was absent from the confirmed list of celebrities that will be heading into the jungle on Sunday.

This now deems him as a prime candidate to enter the jungle as a late arrival.

A show source said: Bosses decided that this years latecomers will be a soap duo.

Cliff was really popular in Enders and hes a big character off-screen too, so they think hell go down really well with viewers.
Cliff leftEastEndersin 2010 after eight years and now stars as handyman Fred Buckle in Call The Midwife.

The famous television presenter was rumoured to enter the jungle, but has been left off the list of confirmed celebrities.

Richard seemed to neither confirm nor deny the rumours when speaking to Lorraine recently.

Fans were hoping Madeley would enter the jungle alongside his son-in-law James Haskell, who will step foot in the jungle on Sunday night.

It had been reported by the Daily Mirror that the former Speaker had demanded 1 million to enter the jungle.

However, the 56-year-old vehemently denies those claims and reportedly requested an apology.

Even though it is unlikely that he could be a late arrival, you can never say never in showbiz.

Reality star Olivia Attwood revealed in September that was in talks with ITV on appearing on I’m A Celeb.

The 28-year-old was part of last year’s I’m A Celebrity: Extra Camp and loved the experience.

She said to the Daily Star: “It would be my dream to do the jungle. Ive made no qualms about that. Its such an iconic show.”

As she does not feature in the confirmed list of celebrities entering the jungle, there is every chance she could be one of the show’s latecomers.

It was reported this summer that television presenter and model Ulrika Jonsson was in talks to participate in this year’s I’m a Celeb.

Sources explained how a stint on the Aussie show would be the perfect new start for the 51-year-old mum as she draws a line under her marriage.

The 52-year-old wore a camouflage shirt when she appeared on Loose Women last month, leading to questions regarding rumours of her entering the jungle.

With Ulrika’s name missing from the confirmed celebs list, time will tell if she will be a surprise late arrival into the jungle.

Stacey Solomon shares gushing tribute to Joe Swash as she supports him after Caroline...