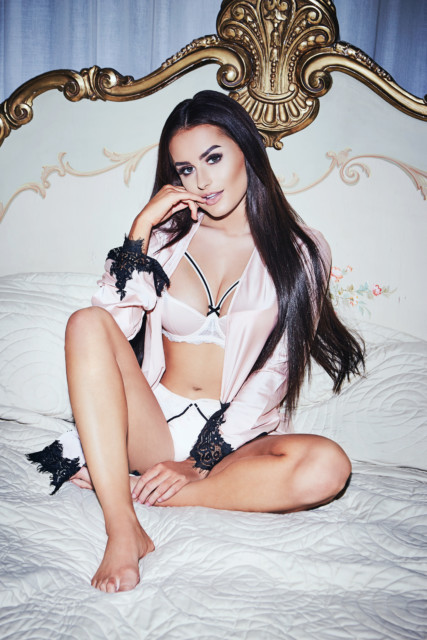 AMBER Davies shows off her puppy dog eyes – but just one lucky creature’s getting their paws on her.

The Love Island star’s only besotted with her pet pooch, Oreo, who moved in with her when she got her first house earlier this year.

Sadly they split up months later.

But she seems quite happy with her pedigree chum.

Amber is from North Wales and even turned down a lead role in the musical Hairspray to be on Love Island. The Love Island star posed with her pooch Oreo

Before appearing on Love Island, Amber declared that her occupation was as a dancer.

She has also worked as an entertainer as part of London’s circus themed club night Cirque Le Soir – the same saucy club where Love Island’s 2016 winner Cara de la Hoyde performed at before joining the show.

Amber’s career has took off since she left the villa.

Last year she made her debut in the West End production of 9 to 5: The Musical. The beauty seems quite happy with her pedigree chum

According to Bizarre Theatre Critic Benjy Potter – “Her superb voice and excellent comic timing left the audience stunned and earned her a place alongside seasoned West End pros.”

Along with the rest of the Love Island cast, she raked in the money doing personal appearances, charging £5,000 an hour.

The in-demand star also landed a £500k contract with the clothing brand, MotelRocks. Coronation Street spoilers: Tim Metcalfe blackmailed by wife Charlie for a divorce as she...