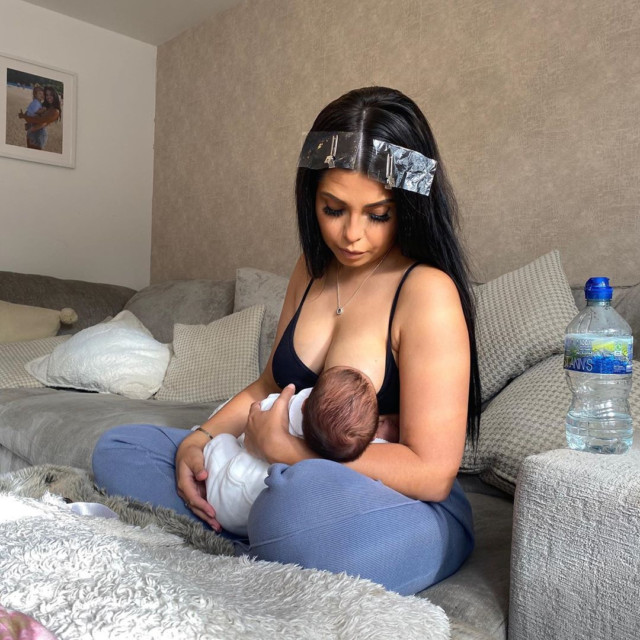 The reality star, 30, shared a sweet snap of her proudly breastfeeding her daughter – reminding fans that motherhood is a full time job.

The TV star also teased her fans saying that she was “off to film something exciting”.

Cara shared the snap with her 1.1 million Instagram followers on Monday, she wrote: “#mumlife never stops, off to film something exciting.”

The mum-of-two couldn’t keep her eyes off Delilah as she gently nursed her newborn.

The brunette beauty looked stunning wearing a black bra, a pair of jeans and simple yet elegant make-up. Fans rushed to show appreciation for her post, one wrote: “You’re such an amazing mum Cara. It is so lovely looking at your pics and seeing a gorgeous newborn.”

Another wrote: “Absolutely gorgeous and so naturally beautiful.”

A third gushed: “Amazing, I know this feeling of trying to start a business with a hungry baby, hats off to you Cara. You’re looking amazing.”

The photo comes days after Cara opened up about the struggles of motherhood, admitting that she experienced a “really tough week”. Taking to Instagram on Sunday, she said: “It’s been a really tough week for everyone.”

Opening up about her change in diet and lifestyle, she said: “I’ve changed my diet; I normally live on spicy foods. I’ve stopped having spice and fizzy, I’ve been drinking loads of water. I don’t drink or smoke anymore.”

She explained that her son Freddie hasn’t been listening to her, Cara added: “It’s really stressful. He doesn’t listen to anything I say. If I tell him off, he tells me off or scratches and pinches me.

“But then I don’t really want to tell him off. I don’t want him to feel pushed out. He’s not really a massive joy to be around at the moment. Cara gave birth to Delilah in July, the star was rushed to hospital to be induced after being diagnosed with pre eclampsia.

They met on the second series of Love Island in 2016, which they went on to win.

They split the following year – just a month before Cara revealed that she was pregnant with their first child, two-year-old son Freddie-George. The couple soon reunited and married in July 2019, before revealing they were pregnant with their second in March this year.

Brits will be advised to wear a mask at work, in shops or on...

Prince Andrew smiles as hes seen for the first time since Queen sacked him...

Gavin Williamson slammed for blaming Ofqual for A-level results chaos as he refuses to...