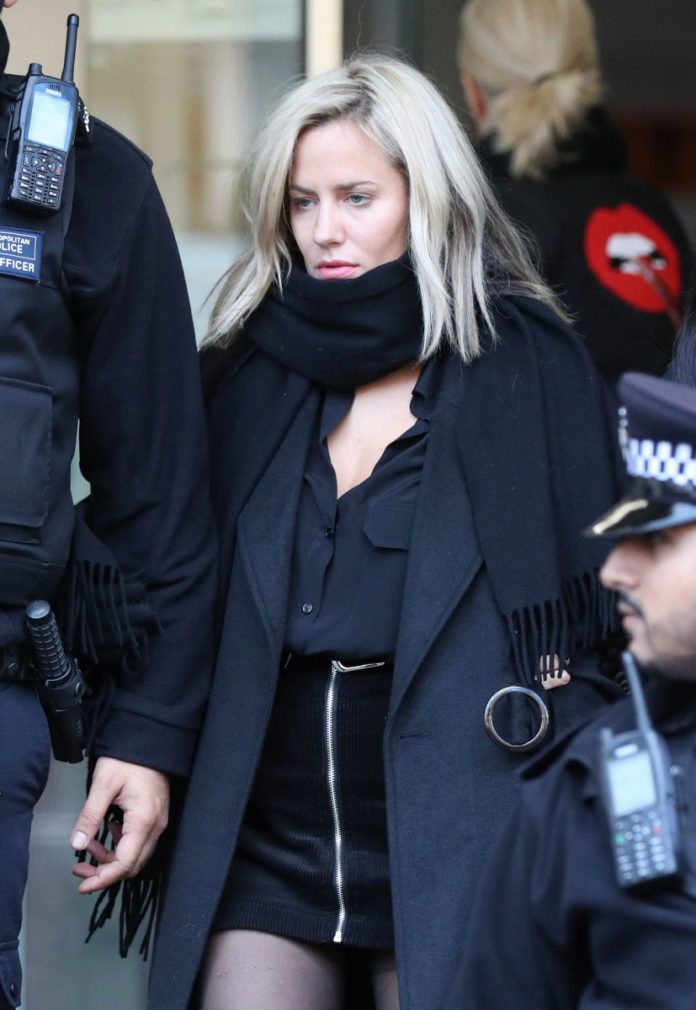 CAROLINE Flack and boyfriend Lewis Burton are following each other on Instagram hours after a judge refused to lift a bail condition banning them from contacting each other.

Flack, 40, wept as she denied attacking her 27-year-old toyboy in his sleep with a lamp at her North London home at Highbury Corner Magistrates’ Court.

The former Love Island presenter yesterday begged District Judge Julia Newton to have a bail condition banning her from talking to Mr Burton lifted, but it was denied – meaning the couple will have to spend Christmas apart.

Flack’s bail conditions prevent her from contacting Mr Burton directly or indirectly and from going to his address ahead of her trial on March 4.

Hours after the TV star and Mr Burton left the court separately they had followed each other on Instagram.

A CPS spokesman told The Sun Online it would be a police matter if it was reported an individual allegedly breached their bail condition.

The Met Police spokeswoman said they do not discuss bail conditions.

The couple were not following each other on the social media platform during Flack’s court appearance yesterday, but had regularly shared pictures of each other loved up on their social media accounts.

Kate Weiss, prosecuting, told the court Mr Burton told a 999 call handler “she tried to kill me” in a three-minute call after the alleged attack.

She said Flack was “manipulative” and she had “flouted” her bail condition to not have any direct or indirect contact with Mr Burton.

Ms Weiss said: “She breached this almost immediately by posting a message on Instagram by writing to my boyfriend I love you.”

Cops found Flack and Mr Burton covered in blood “like a horror movie” after she attacked him over fears he was cheating on her having found text messages on his phone, the court heard.

Prosecutors alleged she left him with a significant head injury at her Islington flat on December 12.

The model and tennis player shared a loved-up image of the couple on Instagram, saying a bail condition banning them from seeing each other was “heartbreaking”.

The prosecution said a trial would see bodycam footage from police officers at the scene and hear the 999 call.

The prosecution yesterday told the court: “During the 999 call he said quite clearly that his girlfriend was beating him up.

“He is almost begging the operator to send help. He said ‘she’s going mad, breaking stuff, she almost cracked my head open.’”

Flack could be heard shouting “you ruined my life” and repeatedly calling him an “a***hole” in the background, the court heard.

After her arrest, Flack “flipped over a table and had to be restrained on the ground”, the prosecution said.

But Mr Burton doesn’t support the prosecution and doesn’t consider himself a victim, Flack’s lawyer told the court.

Paul Morris, Flack’s lawyer, argued his client had suffered enough and she would “conduct herself properly” if the bail condition was lifted.

He told the court: “They had been in a relationship all of this year and he appears in court today to support her and they remain a couple

“She wants to spend time with her partner. If the conditions were lifted there would be no concerns.

“She is in the public eye – this case has been scrutinised, she will conduct herself properly.”

Flack, who has been replaced on the ITV show by Laura Whitmore, wiped her eyes as she stood in front of the glass-enclosed dock to confirm her name, address, and date of birth before the single charge was read out.

When the charge was put to Flack for a second time, she answered: “Not guilty.”

Flack was released on conditional bail and will next appear in court for her trial, which is expected to last a day-and-a-half.

Fruit and veg prices could rise by 30 per cent as cost of living...