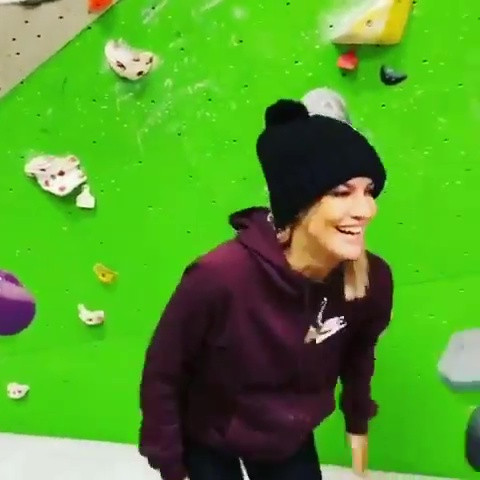 CAROLINE Flack was all smiles as she went bouldering with a friend following her assault scandal.

The 40-year-old star looked relaxed and was in good spirits as her 4 March trial date looms.

The former Love Island presenter was featured in an Instagram video posted by her TV producer friend Mollie Grosberg.

In the clip, filmed at The Castle Climbing Centre in London last night, make-up free Caroline attempts to climb the wall.

Dressed down in black leggings, burgundy hoodie, and black beanie hat, the star asks for guidance as she begins the climb.

After posing for some pictures, Caroline eventually gives up and jumps back down off the wall, giggling: “Ooh, I don’t like it!” as she runs towards a pal.

The brief video was simply captioned: “We r professional climbers”, with Mollie adding the hashtag: “#healthiswealth”.

Caroline has been keeping a low profile since she was charged with assaulting her boyfriend Lewis Burton in December.

The TV presenter – who denies the charge – returned to social media on 28 January to wish her Love Island team luck ahead of the National Television Awards.

She was forced to step down from her role as host in the winter series of the reality show in December, with a source previously telling us that Caroline had ditched alcohol as she eyed a TV comeback.

The insider shared at the time: “Caroline has not touched alcohol since before Christmas and has been getting to the gym every day.

“Caroline has been told Love Island want her back for the next series. Laura [Whitmore] has done a great job so far but the show’s bosses don’t feel she has the same pull.”

Caroline is also hoping to move back in with Lewis following the trial after they were banned from communicating with each other.

She first appeared in court on 23 December where she was accused of hitting Lewis with a lamp while he slept.

The court was told that the star allegedly attacked her partner after she read texts that convinced her he was cheating.

Lewis issued a statement denying the assault, with both he and Caroline said to be covered in blood when officials arrived at their Islington flat after Lewis called 999 saying that Caroline “tried to kill” him.

One officer told Highbury Corner Magistrates’ Court that the flat was “like a horror movie”, with Lewis said to have “begged” the emergency operator to send help.

Caroline was released on bail until her trial next month.

One Love Island girl has already left the island after brutal first recoupling and...