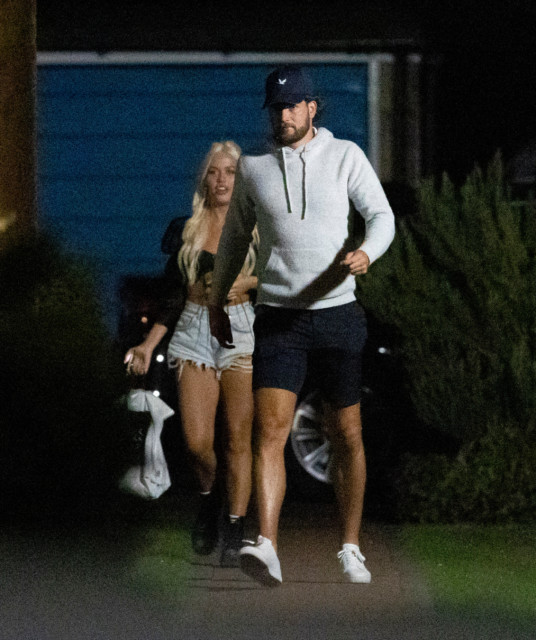 The pair were seen leaving Lewis’s car on Friday night

The Mail Online reports how Lewis and influencer Lottie, 21, hit it off at a house party thrown by Caroline’s bet pal Lou Teasdale in May.

They are said to have since bonded over their respective grief, with Lottie losing both her mum and sister in recent years.

A source told the publication: “Lewis and Lottie have grown close after spending time together at a party at Lou’s house.

“They have been meeting up in secret for weeks but their newfound friendship hasn’t gone unnoticed by mutual pals.

“Not all of Caroline’s friends are happy with how the situation appears to be developing but can understand that both Lottie and Lewis have been there for each other as a shoulder to cry on.” Lottie is the sister of One Direction’s Louis Tomlinson Lottie is an influencer and has millions of followers

The pair were pictured together on Friday night leaving Lewis’s car after going for dinner.

Lewis could be seen leading the way in a hoodie and shorts while Lottie followed in hotpants and a crop top.

HOAR has contacted representatives for Lewis and Lottie for comment.

Caroline was found dead in her London flat in February days before a court trial was due to begin over an assault charge. She strongly denied attacking Lewis at the flat they shared together and her management team slammed the CPS for pursuing the case after Lewis said he didn’t support the prosecution.

An inquest into her death is set to take place on August 5.

Lottie, who is the sister of One Direction’s Louis Tomlinson, has overcome her own devastating losses in recent years. The former couple had shared a flat together in north London

While sister Felicite, 18, accidentally overdosed on a “perfect storm” of cocaine, Xanax and oxycodone and was found unresponsive by a friend at her flat in March 2019.

Having become an ambassador for Sue Ryder, Lottie used her platform to talk about grief on Lorraine earlier this month.

She said: “Grieving in lockdown will be so hard, so it’s a really important time now.

“I want to use my platform to let people know about Sue Ryder’s services.

“Some try to deal with it themselves, but it’s really important that you don’t go through these things alone.

“That’s how you can get yourself in a dark place. It just ends up getting built up inside you and eventually you’re going to explode.”

Last week Lottie was linked to Piers Morgan’s son Spencer after they were seen looking cosy in St Tropez.

Queen Elizabeth news: Prince Harry & Meghan could be ‘reeled back in’ by Royal...