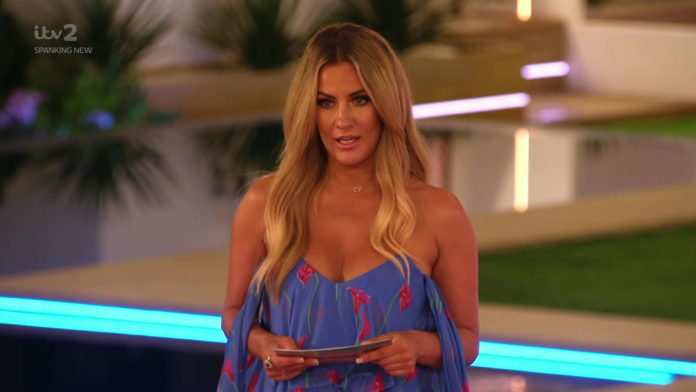 Host Laura Whitmore fought back tears as she introduced a montage of Caroline’s best bits at the beginning of the final.

After watching the tribute, Mollie wrote on Instagram: “That was nice a nice tribute on love island. Hard to watch. She’s so beautiful.”

The 40-year-old former host passed away last Saturday at her home in London, and the Islanders were told about her death off-camera ahead of the final.

During the show a touching eulogy to Caroline, who hosted the programme from 2015 until last summer, aired.

Emotional Laura said: “The past week has been extremely difficult, coming to terms with the loss of our friend and colleague, Caroline.

“We’re thinking of her family and everyone who knew her at this time.

“Caroline loved Love Island, she loved love and that’s why tonight’s final is dedicated to her.”

While the song Feel The Love by Rudimental played, shots of Caroline walking into the villa, meeting the Islanders and hosting AfterSun played out.

Her memorable laugh featured as did sweet moments with Iain Stirling, who provides the voiceover for the show.

Viewers were in tears at the footage, with one writing: “You either wanted to be Caroline or you wanted her to be your friend #carolineflack Beautiful tribute #LoveIsland #bekind.”

Another added: “Watching that love island tribute to Caroline flack really hit me on another level. So many emotions all at once. Hopefully your resting peacefully you wonderful woman. Thanks for all the laughter and entertainment over the years. Youll be missed x.”

A third tweeted: “couldnt hold back the tears watching that tribute to caroline flack on #loveisland.”

Meanwhile a fourth shared: “Have always adored Caroline to pieces, so that #LoveIsland tribute has broke me.”

The hit ITV2 programme was taken off air for two nights following her tragic death.

It returned on Monday evening with an emotional tribute from the shows narrator Iain Stirling.

The devastated comedian fought back tears as he described the late star as a “true friend” and said he was going to miss her.

Spoken over footage of the ocean, Iain said: “We are all devastated that Caroline, a much loved member of our Love Island family, has passed away.

“Our thoughts are with her family and friends at this dreadful time.

“Caroline and me were together from the very start of Love Island. Her passion, warmth and infectious enthusiasm are a crucial part of what made the show connect with millions of viewers.

“Like many of you, we’re still trying to come to terms with what’s happened. My only hope is that we can try and be kinder, always show love and listen to one another.

“Caroline, I want to thank you for all the fun times making our favourite show. You were a true friend to me. Im gonna miss you Caz.”

Coronavirus: Elderly WILL be able to go out and walk their dogs during months...

Schools could re-open after Easter holidays if lockdown continues to work, minister says