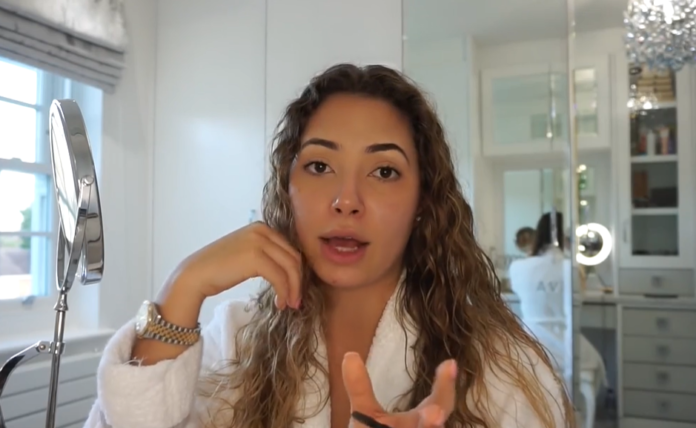 LOVE Island’s Eva Zapico has revealed she was scouted by Love Island producers before appearing on the show.

The 21-year-old entered the latest series of the program during Casa Amor, where she found love with 23-year-old Nas Majeed.

The Bromley bombshell uploaded a YouTube video to her channel, dishing the dirt on her Love Island experience and how she got on the show in the first place.

As she was getting ready at the time she shot the vid, Eva was dressed in white robe and her hair was wet as she had just finished having a shower.

The recruitment consultant, who always wanted to appear on Love Island, explained: “It was very early September and I just woke up one morning and I got a message from the verified ITV account, and they basically messaged me saying ‘we’re looking for a group of singletons to find love this winter.’”

Without even knowing a winter version of the show was taking place, Eva added that she was told to apply online, but admitted she didn’t do it because she was lazy.

“I just never got round to doing it, so a few days later she messaged me ‘where’s your application?’”

The brunette beauty would eventually get round to doing to completing her application and despite being given short notice, she attended the one and only audition day in London.

After progressing through the next stage, Eva recalled a chat she had with the executives and some of the questions they asked.

“They just asked me questions like if I had one night stands and stuff like that, it didn’t feel like an audition for me, I literally just went in there and was just myself.”

She of course made it on to the show and met builder Nas and the pair are now “exclusively dating”.

The Love Island star, 23, said he’s taken the next step with the Casa Amor bombshell, 21, as they hit back at fans who were convinced they’d split up.

Nas also insisted Eva likes him a lot more than she let on on the show.

“She used to follow me around [in the villa]. Her body language spoke more volumes than her actual like, verbally,” he said.

“But, yeah she met my family and the first thing she said was, ‘Oh, hello, auntie.’ And obviously like, to us, to me that was a massive, massive thing.”

He added that his parents definitely approve of Eva.

“My family were like, ‘she’s so respectful. she’s so lovely.’ And they [the producers] just obviously didn’t bring that side of her across. Obviously we have so much banter,” he explained.

Strictly fans brand Shirley Ballas ‘jealous’ as they call for her to be axed...