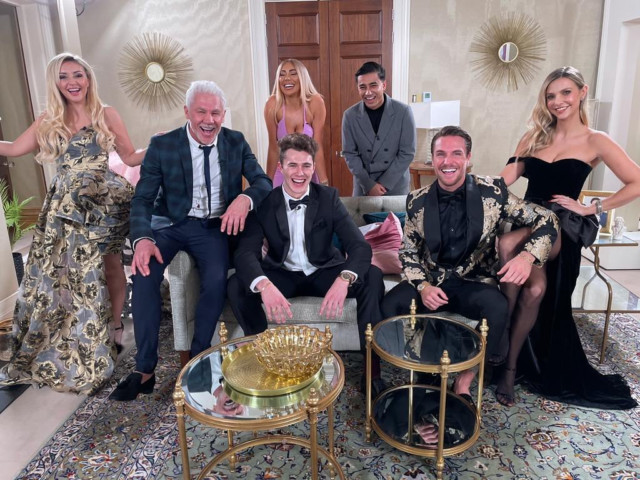 I’m told that to spice things up on this year’s Celebs Go Dating, producers have allowed the contestants some private time away from prying eyes.

The upcoming series of Celebs Go Dating will feature stars including Wayne Lineker, Curtis Pritchard and Chloe FerryThey’re filming at a £30million mansion on an estate in Surrey

The upcoming E4 series, with a cast including Wayne Lineker, Curtis Pritchard and Chloe Ferry, is being filmed at a Surrey mansion.

And the programme’s bosses are allowing contestants to skulk away to a cottage in the grounds of the £30million estate if they make a “connection” with their prospective love interests.

What’s more, I’m told TWO of this year’s line-up have used the cottage with their dates.

A source said: “Getting a night in the Hideaway has been a staple of Love Island and it’s led to saucy scenes.

“With no show on this spring, Celebs Go Dating bosses thought they’d make the most of it and have let their stars use the cottage for some private time.

“They told the cast that if they have a connection they will be granted an overnight stay, but they have to show they’re serious and not just up for some nookie.

“At least two of the celebs managed to get a stay and made the most of it.”

As well as Wayne, Curtis and Chloe, I revealed last year that Made In Chelsea’s Sophie Hermann, Corrie’s Kimberly Hart-Simpson, presenter Karim Zeroual, and DJ Tom Zanetti would also be in the line-up. Unlike in previous years, the celebrities will be living among their dates in the mansion.

Not being able to escape their suitors will no doubt make for some awkward moments — as well as some naughty ones, it seems. In one scene in the show, which is set in the Eighties, two men discuss gay stars who aren’t publicly out of the closet. And they’re scandalised by the fact the list includes Phillip. In 2020 the This Morning host admitted he was gay.

But when he joined Children’s BBC in 1985, Phillip was a heart-throb for teenage girls as he introduced kids’ shows from the “broom cupboard” with puppet Gordon the Gopher.

One of the It’s A Sin characters says: “I had a friend who works in the broom cupboard who said he’s at it like Billy-o!”

Of course, this detail might not be based on insider knowledge. However, It’s A Sin’s writer Russell T Davies also started working at Children’s BBC in 1985.

Sheri’s got lorra love for dogs

QUITE a few viewers will have been surprised to see Sheridan Smith hosting new BBC1 show Pooch Perfect.

But it turns out to be the paw-fect role for the award-winning actress. The Cilla star, who presents the second episode of the dog grooming contest tonight, absolutely adores our four-legged friends.

Sheridan, who wasn’t on TV much last year due to Covid-19 and giving birth to her first son, Billy, said: “When I was growing up, we’d sometimes take on stray dogs, who would become my best mates.”

She explained: “I think it’s the loyalty that I love. They are always there if you have a bad day, whether you leave the house for five seconds or five weeks, and they are so excited to see you.”

Turns out dogs aren’t just a man’s best friend, but a woman’s too.

Silence is not golden for Ricky

A YEAR on from his famous Golden Globes speech, Ricky Gervais has revealed what he would have said if he had been hosting again this year.

He took aim at Gal Gadot for her cringe rendition of John Lennon’s Imagine. He told Twitter fans: “We’d all sing Imagine. I’d announce my new pronoun which is ‘It’. I want to be referred to as ‘It’.”

The comic added: “I’d probably do the same again, continue slagging off Hollywood that’s crumbling. I’d have a go at their pretend wokeness. Say their films are failing.”

Ricky went on: “I think people have got fed up with actors telling normal people how to vote.”

The man is a genius.

Doctors MUST return to seeing patients in person to save lives, Boris Johnson says

Sims 5 has been revealed as more realistic than ever before

Cheryl says the Queen is so delicate and has hair like candy floss in...

Add value to your home by picking the perfect front door with our top...