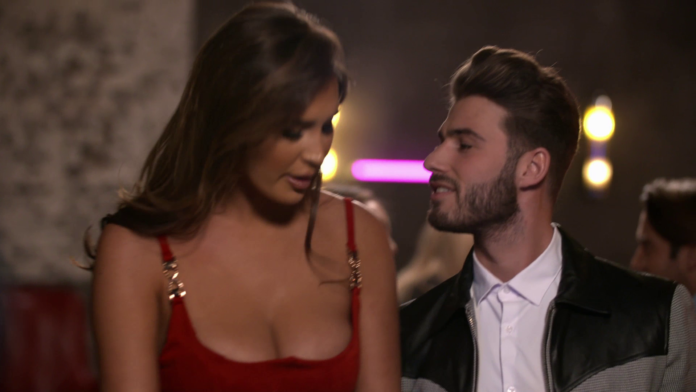 CELEBS Go Dating is about to air its most awkward episode yet as Joshua Ritchie is forced to prove how tall he is and Malique Thompson-Dwyer mocks his date as “crazy”.

Things get awkward for the Love Island star after he asks what type his date likes.

Turns out it’s tall – and when they get up to check, the date is towering above Josh.

After standing up to check, he stumbles over his words as he says: “Tall? Oh jeez, actually you’re not too… You’re only a head.”

The date then measures the distance between the two of them with her hand.

She reassures him: “With your hair… If I had my shoes off and I was in flats, I’d be like that.”

Before leaning right down, causing narrator Rob Beckett to quip: “Bloody hell he said take your shoes off not your shins, you just dropped about a foot.”

But things are not working out too well for Hollyoaks actor Malique as well when he asks for the star sign of his date.

She replies Scorpio and the result is less than flattering.

Malique shouts: “Oh my god, Scorpios. You know what it is, yeah, I always end up with Scorpios.”

She replies: “We’re the best.”

Putting his foot in it, Malique replies: “Nah you’re, you’re all crazy.

“You show a lot of love but you’re tapped in your head, crazy.”

This isn’t the only time Malique’s awkward flirting has landed him in the deep end.

After admitting he had a foot fetish to dating coaches Paul Carrick Brunson and Anna Williamson, he later let a woman called Jakeeme know at the mixer.

“I know who you are,” he told her. “You’re the one with the nice feet.

Before she had time to respond, another woman, Danica, moved in for a chat with Malique.

It prompted the actor to say: “I’m not even going to lie, Danica, I searched you up on Instagram.”

And he tried the kiss line again, this time with a stunned Jakeeme watching on.

He said: “I just want to kiss you right now. Can I? Can I get a little kiss?”

It proved too much for Jakeeme, who cut her losses and walked away.

Celebs Go Dating is back on Sunday night at 9pm on E4.

Matt Hancock consulted girlfriend ‘at length’ before signing up for I’m a Celebrity &...